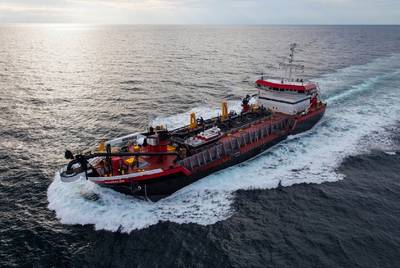 Weeks Marine’s new self-propelled hopper dredge, Magdalen, was delivered by Eastern Shipbuilding on December 22 following sea trials and regulatory inspections. The newbuild is one of the two newest, and among the largest hopper dredges in the U.S., and will bring formidable pumping power to offload beach quality sand or other materials for land reclamation.

On December 28, the new dredger sailed from Eastern's Allanton facility in Panama City, Fla. on her maiden voyage to the East Coast.
“The Magdalen arrived [January 2] in Southport, N.C., and is bringing on supplies and crew before going to work on one of the State’s most critical projects: the protection of Highway 12 in the Buxton area on North Carolina’s Outer Banks,” said Weeks’ Senior Vice President, Dredging Division, J. Stephen Chatry.
“As the single largest investment in Weeks’ 99-year history, I am pleased that the Magdalen’s first project will be finishing up a vital project to North Carolina and to visitors from around the world,” said Weeks’ President, Richard S. Weeks.
The Jones Act dredge Magdalen is dedicated to the domestic marketplace and was designed specifically for the conditions found in the U.S
“Weeks works hard to identify and understand growing markets in the U.S. and is constantly evaluating new opportunities to meet new demand,” said Eric Ellefsen, Weeks’ Executive Vice President. “We are particularly attentive to the U.S. Army Corps of Engineers’ program, and have been pleased by the strong growth in our second home, Louisiana, as the State fights coastal erosion and the loss of valuable wildlife habitat.”
Weeks said the introduction of Magdalen effectively doubles its hopper dredging capacity, joining the company’s workhorse hopper dredges RN Weeks and BE Lindholm, whose combined hopper capacity is less than that of the new dredge.
Magdalen will be crewed by members of the International Union of Masters, Mates and Pilots (34 permanent seafaring jobs).
Designer: Royal IHC
Builder: Eastern Shipbuilding Group
Dimensions (Overall): 356’-0” x 79’-6”’x 27’-3”
Propulsion Horsepower: (2) 5,682 BHP
Main Engines: (2) GE 16V250
Main Shaft Generators: (2) 3,400kW
Auxiliary Generator: (1) GE 6L250 (1,423kW)
Emergency Generator: (1) Caterpillar C18 (425kW)
Classification: Lloyd’s Register, +100A1 Hopper Dredger, +LMC, UMS
Flag & Regulatory: USA, USCG
Hopper Capacity: 8,550 yd³
Booster Pump Power: (2) @ 1,600kW
Dredge Pump Power: (1) @ 1,600kW
Jet Pump Power: (2) @ 445kW
Bow Thruster: (1) 730kW VFD Fixed Pitch Tunnel Unit

Dutch shipbuilder Royal Bodewes on Friday launched and christened the latest newbuild in a series for U.K.-based shipping…