Delivery of World's Largest Cruise Ship Delayed Due to COVID-19 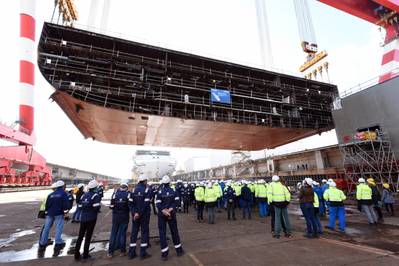 Delivery of the world's largest cruise ship Wonder of the Seas has been delayed due to coronavirus impacts at the Chantiers de l’Atlantique shipyard in Saint-Nazaire, France.

The shipyard delays mean Royal Caribbean's new record-breaking cruise ship will not enter service from Shanghai in spring 2021 as planned, a spokesperson for the cruise line confirmed to MarineLink after the news was announced on Royal Caribbean's Chinese website. A new delivery has not been specified.

The 362-meter Wonder of the Seas will be slightly larger than its 228,081-ton Oasis-class sister ship Symphony of the Seas delivered in 2018, making it the world's largest cruise ship, with capacity for more than 5,500 passengers and 2,200 crew. It will also be the first Oasis-class vessel to debut in the Asia-Pacific market.

Wonder of the Seas is Royal Caribbean's fifth Oasis-class vessel and the third to built by the French shipyard, following Harmony of the Seas delivered in 2016 and Symphony of the Seas. The other two ships in the class, Oasis of the Seas and Allure of the Seas, were delivered from STX Europe's Turku Shipyard in 2009 and 2010.

A sixth Oasis class vessel is on order at Chantiers de l’Atlantique, and it will be even larger than Wonder of the Seas upon completion in 2023. Royal Caribbean did not say whether its delivery would also be delayed.

Earlier this year it was revealed that the delivery of another Royal Caribbean ship would be pushed back from 2020 to 2021 after separate fires broke our weeks apart aboard the Quantum class newbuild Odyssey of the Seas being built at the Meyer Werft shipyard in Germany.

Rival Carnival Corp has also faced shipyard delays this year due to COVID-19.

Austal Australia launched the VOLTA series of electric-powered high speed ferry solutions, with the introduction of the Passenger Express 46V…