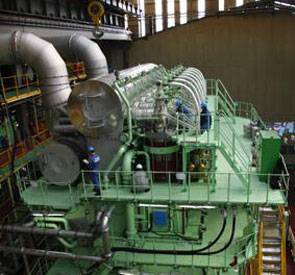 MAN Diesel has broadened its product portfolio with the development of its new, Type K80ME-C9 two-stroke, low-speed engine. The ME-C9 engine recently passed the final milestone on its way to commercial applications in the marine sector with a successful Type Approval Test (TAT).

The first production version of the MAN B&W-branded engine successfully completed its TAT programme at Hyundai’s (HHI-EMD) works in Ulsan, Korea. HHI-EMD’s two-stroke engine assembly and test shop #2 was the venue for the test and hosted representatives from the shipyard, ship owner and leading Classification Societies. The MAN B&W 7K80ME-C9 engine develops 31,710 kW at 104 rpm and is destined for a vessel operated by the A.P. Møller Mærsk group that also includes Waste Heat Recovery technology. The ME-C9 engine enhances the green credentials of the same vessel that can also boast of a highly efficient waste-heat recovery system. The engine is the first of four large-bore, Mk. 9 engines, all displaying high power density, and due for production during 2009.

The four engines are based on the well-proven technology of MAN Diesel’s mechanical MC and MC-C engine ranges. Broadly speaking, the ME-concept represents an upgrade of the mechanical engines with electronic controls that provide improved, operational economy and flexibility, better maneuverability and easier overhauls.

Søren Jensen, Vice President and Head of Research and Development, Marine Low-Speed, MAN Diesel, said, “The electronic, two-stroke ME-C range is among the most popular available on today’s market. A major advantage is its ability to operate at even very low load for indefinite periods of time, whilst offering a substantial reduction in fuel-oil consumption compared to conventional engines at such low loads.”

“During testing, the performance of the 7K80ME-C9 engine, an engine that is fully compatible with IMO Tier-II regulations, exceeded expectations and delivered a lower fuel-consumption than we anticipated.” He continued, “We are proud of this new engine type, which has a 20% higher power density compared to the previous mark. We have been able to achieve this using a new construction and calculation methodology as we now have more know-how in terms of where to distribute weight. With the ME-C9, we have not only a more compact engine but also one that is easier to overhaul as we have focused on making all components easily accessible for inspection and service.”

Advantages of the ME-C9 range include 20% higher power density differentiated distances between cylinders to aid compactness and maintain overall weight, integrated scavenge air receivers and cylinder frame weight-optimized connection rods, low-friction crosshead fuel system with new servo pressure from 200 to 300 bars where it has been possible to reduce component size.