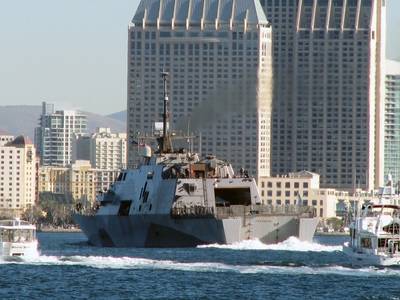 "This deployment was a huge success for the LCS program, for us as a crew, and for the Navy in general," said Cmdr. Dale Heinken, commanding officer of Freedom's Blue Crew. "The Sailors did very well executing the mission."

Deployed since March 1, 2013. with her "Gold Crew", known formally as Crew 102, the ship took part in a number of theater security cooperation and maritime presence operations with partner nations in the region. In August, Crew 102 swapped with the ship's "Blue Crew" (Crew 101), which completed the deployment and brought the ship back.

"The camaraderie on this ship is great because it is a smaller ship with a smaller crew," said Electronics Technician 1st Class Bert Olaveson. "You get to know the people that you are working with on a more personal level, which made this deployment that much more rewarding."

Fast, agile and mission-focused, littoral combat ships are designed to operate in near-shore environments and employ modular mission packages that can be configured for surface warfare, mine countermeasures, or anti-submarine warfare.