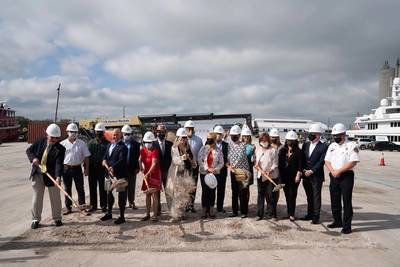 Plans to convert the century-old Port of Fort Pierce into a repair and refit facility for the global fleet of megayachts and large sailing yachts are moving full speed ahead.

After a lengthy permitting and review process, Derecktor Shipyards has been granted approval from the U.S. Army Corps of Engineers, U.S. Fish and Wildlife Service, Florida Department of Environmental Protection, St. Lucie County Board of County Commissioners and the City of Fort Pierce to begin construction of its newest shipyard – Derecktor Ft. Pierce.

Derecktor officials broke ground at the Port on November 13 during a small ceremony where federal, state and local dignitaries brandishing golden shovels, hard hats and face masks gathered to commemorate the historic occasion.

“This will be one of those places that people will be looking at worldwide to get their repairs, their work, their upgrade done, that’s an incredible thing to say about what this is going to do for this community and we couldn’t be more proud to do it,” said U.S. Representative Brian Mast.

Derecktor has contracted with Shoreline Foundation, Inc. to develop a new haul-out basin at the Port by excavating a 220-foot long by 50-foot-wide portion of the existing concrete wharf and creating a slipway where the 1,500-ton mobile boat hoist will lift yachts up to 250 feet in length out of the water for service.

Construction also includes the installation of a utility loop spanning the perimeter of the facility and supplying power, water and fiberoptics; converting the aging Indian River Terminal into a state-of-the-art workshop; piping in a new high-hazard level two fire suppression system; repairing existing bulkheads; and a host of other necessary infrastructure improvements.

“This is a pivotal moment for Derecktor Shipyards and St. Lucie County,” said Justin Beard, marketing manager, Derecktor Shipyards. “While a tremendous amount of preparation has already gone into this project, the real work is just beginning. There will be an increased amount of construction activity at the Port during the coming months as we prepare the facility for hauling operations.”

Derecktor said it anticipates construction of the slipway lasting approximately five months. At the same time, the world’s largest mobile boat hoist is expected to be shipped on December 1 from Cimolai Technology in Northern Italy to Port Everglades, then trucked in containers to Fort Pierce shortly thereafter.

Standing 85 feet tall, 75 feet wide, 120 feet long and weighing 738 tons, the machine is the engine of Derecktor Ft. Pierce and once fully operational, will provide an economic boon for Fort Pierce and St. Lucie County.

“This is so historic and Derecktor is going to put Fort Pierce on the map. I pledge to you that Fort Pierce stands ready to cooperate in making this and the whole port area successful,” added Fort Pierce Mayor Linda Hudson.

Founded in 1947, Derecktor Shipyards is active in the construction, repair and refit of yachts, commercial and military vessels. Today, four Derecktor facilities span the Eastern Seaboard of the U.S. from Maine to South Florida, offering vessel owners and operators everything from marina space to megayacht construction.