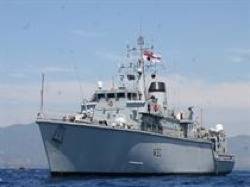 HMS Ledbury was on patrol with a NATO task group off the Sardinian capital Cagliari when her sonar picked up a contact on the seabed.

That prompted Ledbury's team to launch their remote-controlled robot mine disposal system, Seafox, which beamed back a live video feed to the warship's operation rooms.
Seafox is used both to identify objects and also dispose of them, courtesy of the explosive charges it carries.In this instance, however, there was so much marine growth on the mine that it needed a first-hand inspection from Ledbury's specialist mine clearance divers.

The mine was designed to be anchored to the seabed, float just below the surface and detonate if struck by the hull of an unsuspecting passing vessel, blowing them apart with up to 335kg of high explosives but it had long since broken away from its mooring and sunk to the floor of the Mediterranean, but it still posed a threat to fishermen or other vessels if it had been moved in rough seas.

Ledbury's dive team, working with their Italian counterparts, placed 4lb (1.8kg) packs of plastic explosives on the mine and following some help by the Italian Coastguard to shepherd a few local fishermen and yachts out of the area, the combined operation resulted in the detonation of a third of a tonne of explosives, making port approaches safe for navigation.