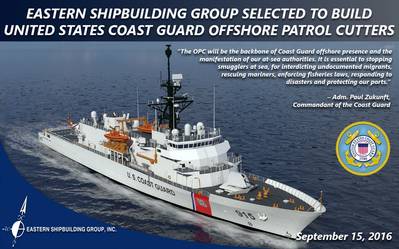 The Department of Homeland Security, in close coordination with the U.S. Coast Guard, granted extraordinary relief to the Eastern Shipbuilding Group (ESG) for the Offshore Patrol Cutter (OPC) under the authority of Public Law (P.L.) 85-804.

ESG submitted a request June 30, 2019, for extraordinary relief after their shipbuilding facilities sustained significant damages from Hurricane Michael, a Category 5 storm, in October 2018.

Acting Secretary of Homeland Security Kevin K. McAleenan made the decision to grant extraordinary contract relief limited to the first four hulls on the basis that ESG’s performance on the OPC contract is vital to the national defense. The Coast Guard will immediately transition to a follow-on competitive contract for the remaining OPC program of record.

P.L. 85-804 was enacted in 1958 and extended to DHS through Presidential Executive Order in 2003. Under this law, an existing contract may be amended or modified when such actions are necessary to facilitate the national defense.

The Coast Guard, supported by DHS and the Navy, conducted an extensive analysis of ESG’s request guided by law and Federal Acquisition Regulation. This review included an assessment of the cost, schedule, and performance impacts on the existing contract. The review was overseen by a Contract Adjustment Board chaired by the DHS Deputy Under Secretary for Management.

“Eastern Shipbuilding’s request for extraordinary relief was carefully considered,” said Coast Guard Vice Commandant, Admiral Charles W. Ray. “This review validated the essential contributions the OPC will provide to our national security and determined that limited relief, in parallel with immediate recompete, is the best option in this exceptional situation. Doing so is consistent with the law, fiscally responsible, and the most expeditious means to deliver this essential national capability.”

The Coast Guard intends to release a Request for Information to gauge industry interest in re-competing the remainder of the OPC program of record. This information will inform the acquisition strategy for the follow-on procurement.

The OPC will replace the fleet of Medium Endurance Cutters, commissioned between 1964 and 1991, providing a critical capability between the National Security Cutter and the Fast Response Cutter. OPC acquisition will expand the Coast Guard’s capability to secure the U.S. border and approaches, disrupt drug cartels and other illicit actors, prevent unlawful immigration, and enhance national preparedness. This decision will ensure critical capabilities are delivered to the fleet as expeditiously and responsibly as possible.