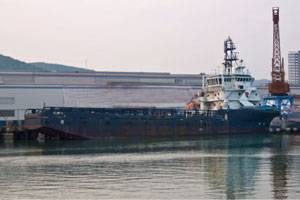 An additional four-boat order is being completed at the Shejiang Shipbuilding Company yard near Ningbo China. The first of the vessels, the Desoto Tide, was delivered in January ‘09 with the second, the Gubert Tide, receiving extra outfitting at Tidewater’s Hong Kong facility in late April. The third vessel, the Couper Tide, was alongside at the Ningbo shipyard being completed for delivery at the end of May. A fourth vessel the Wise Tide was also under construction.

All four of these vessels are designed by Seattle’s Guido Perla and carry the designation GPA670 MKIII to indicate the 240 ft length. The Mark III in the identifier indicates a particular set of options and outfittings that differ from other GPA670s, but the propulsion package remains the same. Set on the main deck level to leave virtually the full 54 ft wide hull available for cargo, the main engines include three Cummins QSK60 powered 1,825 kW (2,501 hp) generators. These provide electrical power to the two 2000 hp electric motors that power a pair of aft-mounted azimuthing drives set alongside a fixed centerline propeller. A pair of tunnel bow thrusters with controllable pitch propellers gives the boat a DP2 rating.

In a statement on the GPA670 vessels the designer said, “The diesel-electric propulsion system is environmentally friendly by decreasing CO2 emissions by 30% and it also offers improved fuel efficiency. Clients benefit from considerable cost savings, as the installation of diesel generators of different output ratings can provide smaller increments of power to best suit a given operational mode. Additional electric consumers can be added to the design, such as additional fi-fi pumps and bow thrusters without adding dedicated diesel engines to drive them.”