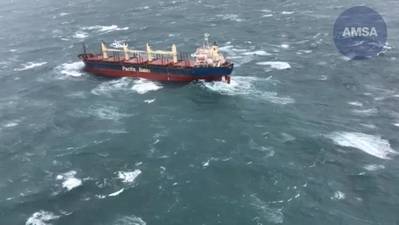 A bulk carrier that lost power in bad weather off Australia's east coast has been towed into Botany Bay, near Sydney, the Australian Maritime Safety Authority (AMSA) said.

The Hong Kong-registered Portland Bay left Port Kembla on Sunday and experienced engine failure with 21 people on board, about 1.2 kilometers east of Garie Beach, NSW on Monday morning.

The vessel had been anchored off Cronulla Beach since early Monday evening after breaking free from towing cables attached to smaller tugs which had been attempting to move the vessel away from the shore.

AMSA, as Maritime Emergency Response Commander, issued a legal direction to Portland Bay’s master and salvage team that the vessel must be moved to a berth in Botany Bay.

Once bad weather that prevented the vessel’s movement subsided on Wednesday, the bulk carrier was towed by emergency towing vessel Glenrock in combination with other tug assets ahead of more bad weather forecasted for Thursday.

The 170-meter-long Portland Bay has safely docked in Botany Bay, and AMSA has taken over as lead agency from the NSW Port Authority.

While the vessel is berthed at Botany Bay it will be required to undertake all necessary repairs before leaving port. The berthing of the Portland Bay follows the legal direction issued by AMSA to the vessel late yesterday.