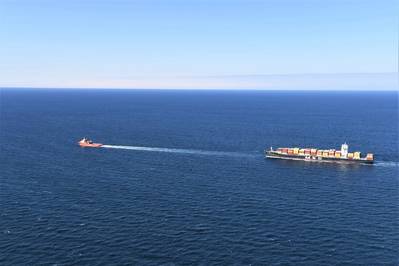 A containership that lost power and went adrift off Canada's East Coast has been towed to Sydney, Nova Scotia, the Canadian Coast Guard said.

The Panamanian-flagged MSC Kim departed Halifax on March 3 en route to Montreal, but went adrift on March 9 after it suffered engine problems off Port au Port, Newfoundland and Labrador. No injuries or pollution have been reported.

The offshore tug Atlantic Kingfisher secured a towline with MSC Kim on Thursday morning and towed the vessel to Sydney.

Canadian Coast Guard vessels CCGS Terry Fox and CCGS Jean Goodwill were on standby in case of an emergency.