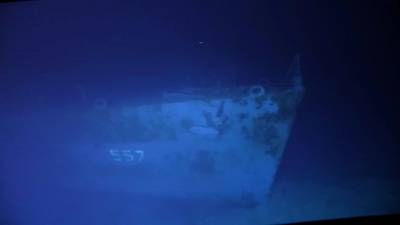 The expedition was backed by Victor Vescovo, is an entrepreneur, explorer and retired U.S. Navy Commander who personally piloted his submersible DSV Limiting Factor down to the wreck during two separate, eight-hour dives 21,180 feet (6,456 meters) below the ocean's surface. These constituted the deepest wreck dives, manned or unmanned, in history.

"The image is impressive and we look forward to seeing the rest of the data collected during the expedition because the story of the Fletcher-class destroyer USS Johnston (DD 557) and her crew is a perfect example for modern Sailors of the honor, courage, commitment and valor of their predecessors from the Greatest Generation,” said Naval History and Heritage Command (NHHC) Director, Rear Adm. Sam Cox U.S. Navy (Retired).

The World War II Fletcher-class destroyer USS Johnston (DD 557) was lost at the Battle off Samar, part of the Battle of Leyte Gulf, on October 25, 1944. Just 141 of the ship's 327 crew members survived.

The wreck was originally discovered on the edge of an undersea cliff in October 2019 by the late Paul Allen’s Vulcan Inc. and vessel R/V Petrel under the leadership of renowned ocean wreck explorer Robert Kraft. On that expedition, film of pieces of the vessel were taken by a remotely-operated vehicle (ROV), but the majority of the wreck including its upright, intact forward two-thirds including bow, bridge, and mid-section lay deeper than the ROV’s rated depth limit of approximately 20,000 feet (6,000 meters).

The Naval History and Heritage Command (NHHC) assessed the wreck as probably Johnston based on relative location, however, Johnston and Hoel (DD-533), lost in the same battle, were virtually identical Fletcher-class destroyers. The wreck had features known to be on Hoel but not confirmed on Johnston, as they would have been post-construction add-ons.

Extensive research by naval historian and Annapolis alumnus LCDR Parks Stephenson, USN (Ret.) allowed the position of the wreck to be plotted as part of the development of a dive plan. “We used data from both the U.S. and the Japanese accounts and as is so often the case the research brings the history back to life. Reading the accounts of the Johnston’s last day are humbling and need to be preserved as upholding the highest traditions of the Navy. This was mortal combat against incredible odds.”

The recent dive to the wreck, sponsored by undersea technology company Caladan Oceanic, revealed that the ship's hull number “557” is clearly visible on both sides of its bow and two full 5-inch gun turrets, twin torpedo racks, and multiple gun mounts are still in place and visible on the superstructure.

Vescovo has been in communication with NHHC about his investigation of the wreck and the protocols for not only preserving it but respecting it as the final resting place for many of its crew. He has committed to providing the U.S. Navy with all the sonar data, imagery and field notes collected by the expedition.

At the conclusion of the expedition, the Caladan Oceanic team brought their surface vessel DSSV Pressure Drop to a stop in the vicinity of the battle, sounded the ship’s whistle, and laid a wreath in honor of the lives lost there in defense of freedom. No human remains or clothing were seen at any point during the dives and nothing was taken from the wreck.

“In some ways we have come full circle,” said Vescovo. “The Johnston and our own ship were built in the same shipyard, and both served in the U.S. Navy. As a U.S. Navy officer, I’m proud to have helped bring clarity and closure to the Johnston, its crew, and the families of those who fell there.”

“We have a strict ‘look, don't touch’ policy but we collect a lot of material that is very useful to historians and naval archivists. I believe it is important work, which is why I fund it privately and we deliver the material to the Navy pro-bono,” Vescovo said.

Cox said, “The Naval History and Heritage Command greatly appreciates the efforts of Commander Vescovo and his expedition team in positively identifying the wreck of the destroyer USS Johnston (DD-557,) lost on 25th October 1944 in one of the most heroic actions in the entire history of the U.S. Navy. Commander Ernest Evans and his entire crew went above and beyond the call of duty engaging an overwhelming and vastly superior Japanese force to buy time for the escort carriers he was charged with protecting, to escape. The Johnston was awarded a Presidential Unit Citation—the highest award that can be given to a ship. Evans was awarded a posthumous Medal of Honor, the first Native American in the U.S. Navy and only one of two destroyer skippers in World War II to be so honored.

The Johnston measured 376 feet (115 meters) long with a beam of 39 feet. The ship was sunk during an intense battle against vastly superior Japanese forces off the coast of Samar Island during the Battle of Leyte Gulf, widely cited as the largest naval battle in history. “In no engagement in its entire history has the United States Navy shown more gallantry, guts and gumption than in the two morning hours between 0730 and 0930 off Samar,” wrote Rear Admiral Samuel E. Morison in his History of U.S. Naval Operations in World War II. Upon the commissioning of the ship, the destroyer’s ¾ Native American Captain from Oklahoma, Commander Ernest Evans, told his crew that he would “never run from a fight,” and that “anyone who did not want to go in harm’s way, had better get off now.” None of his crew did so. 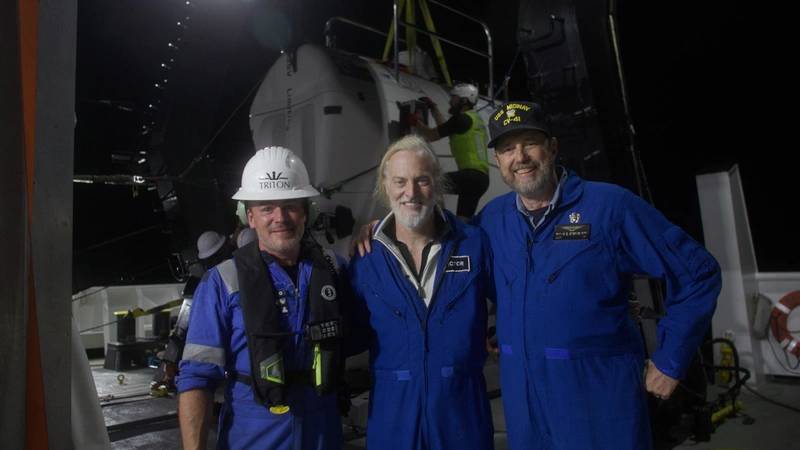 The recent discovery brings clarity to the loss the USS Johnston and helps close a chapter on one of the greatest last stands in all naval history—which ended in a completely unpredictable American victory against enormous odds. The verification of the wreck as the Johnston also highlights the story of its Captain who immediately attacked ships up to twenty times his size to defend a near-defenseless support fleet nearby. “It was ‘the Alamo’ at sea,” Vescovo, a native Texan added, “but in this case the defenders—unbelievably—won.”

Expedition leader Kelvin Murray (EYOS Expeditions) commented, “This was a real team effort requiring the individual skills of everyone onboard. Our EM-124 sonar, Triton Submarine’s unlimited depth submersible, a highly practiced team and some excellent sonar and navigation support all combined to enable a successful outcome. With this system we could locate, investigate and film wrecks at any depth in any ocean; it is a fantastic tool.”

The submersible DSV Limiting Factor has no operating depth limitation, does not require a tether to the surface, and can hold two occupants for real-time visitation and analysis of wrecks. The craft is highly maneuverable and carries an array of high-definition and 4K cameras. The submersible is best known as the vehicle that Vescovo piloted to the deepest points in each of the world’s five over oceans during the ‘Five Deeps Expedition’ in 2019. It recently completed its 14th dive to the Challenger Deep, the deepest point on Earth (10,925 meters).

The highly maneuverable submersible was able to conduct a thorough survey of the wreck to verify its identity, construct a map of its layout, and obtain high-definition imagery that can be used by naval historians. “We need to take great care to make sure that the ship remains completely undisturbed and I believe that can be very effectively done in manned craft, especially as the depth here precludes most remotely operated vehicles. We could see the extent of the wreckage and the severe damage inflicted during the intense battle on the surface. It took fire from the largest warship ever constructed—the Imperial Japanese Navy battleship Yamato, and ferociously fought back. All of the accounts pay tribute to the crew’s bravery and complete lack of hesitation in taking the fight to the enemy, and the wreckage serves to prove that,” Parks said.