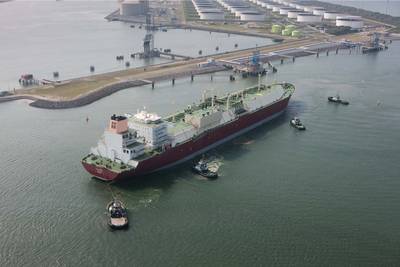 Qatar will maintain its dominance over the global liquefied natural gas market despite increased supply from Australia and the United States, the weekly report by Qatar National Bank (QNB) said.

A report in The Penisula quoting QNB said that Qatar currently accounts for 30.1 percent of the global market. The country captured nearly 70 percent of the new African demand, more than compensating for the lower cargoes to Japan.
Amidst these market shifts, Qatar maintained its position as the world's largest and most cost-efficient producer, accounting for 30.1 per cent of global supply and capturing part of the new demand growth, reports The Gulf Times.
The commitment to boosting long-term production will solidify its position as the global LNG leader, QNB said.
Qatar’s position is likely to be cemented by its recent decision to boost production by 30 percent over the next five to seven years.  Australia is now the worlds second largest LNG producer and accounted for 16.4 percent of supply in 2016.
New data from BP have provided a summary of the state of the global liquefied natural gas (LNG) market in 2016. The market remained oversupplied, but the extent of oversupply increased.
Global LNG supply rose by 6.5 percent compared to virtually zero growth over 2011-2015. Demand growth increased by 4.2 percent, its fastest rate in the past five years.
Meanwhile, a recent report in the Reuters said that  Qatar's plan to boost liquefied natural gas (LNG) output by 30 percent is the opening shot in a price war for customers in Asia pitting the Gulf state against competitors from the United States, Russia and Australia.
Qatar, facing regional isolation in a diplomatic dispute with its Gulf neighbors, took energy markets by surprise on Tuesday when it said it would raise its LNG production to 100 million tonnes per year - equivalent to a third of current global supplies - within the next five to seven years.