Judge Lifts Drilling Ban ... but Will it Last? 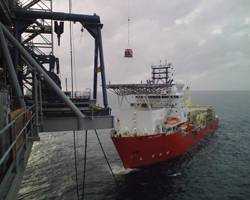 Offshore suppliers are anxious to get their vessels, such as the HOS Achiever, working again in the GOM. (Photo Credit: Hornbeck Offshore Services)

While offshore drillers, service and product suppliers received a bit of good news when U.S. District Judge Martin Feldman's ruled yesterday to remove the Obama Administration’s six-month moratorium on offshore drilling, questions regarding how quickly operations will return to normal are still up in the air, as according to the Wall Street Journal the administration vows to fight the decision.

"Judge Feldman recognized the potential for the ban to cause significant economic harm to our country and the Gulf Coast, not to mention the damage it would do to America’s maritime industry," said OMSA President Ken Wells. “Our members are not the drilling companies or the oil companies.  They are the companies that carry supplies and people to and from the offshore energy projects.  Even though they had nothing to do with the BP accident, it was clear that they would bear the brunt of the negative consequences of the ban. While this is clearly not the end of the legal process, it is extremely good news and gives our industry hope that we will survive this government action.”

With a large number of drilling rigs idled due to the U.S. offshore drilling moratorium, attention is now shifing to who should pay the contracts for the idled rigs, some which were generating more than $600K per day. According to the Wall Street Journal, while most drilling rig contracts contain stipulations on payment in the wake of a stoppage due to natural causes, such as hurricanes, work stoppages due to government action and interference are generally not included in Gulf of Mexico drill rig contracts. These type of clauses are relegated more to countries where political instability, such as offshore Africa, may serve to halt drilling activities.

Last week Anadarko Petroleum asked to judge to negate its contract for a Noble Corp. rig, according to a report in the June 23, 2010 edition of the Wall Street Journal, reportedly the first such dispute to go to court.