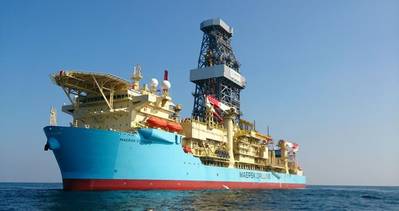 Maersk Drilling was awarded a contract from eni Ghana Exploration and Production Ltd. for employment of the newbuild drillship Maersk Voyager.
The contract will see Maersk Voyager work on the Offshore Cape Three Points (OCTP) Project offshore Ghana with expected commencement in July 2015. The firm contract period is 3.5 years with an option to extend by one year, and the total estimated revenue from the firm contract is $545 million including mobilization and escalations.
Claus V. Hemmingsen, CEO in Maersk Drilling and member of the Executive Board in the Maersk Group, said, “West Africa has been a strategic focus area for Maersk Drilling, since we embarked on our deepwater expansion, and with this contract we expand our presence in the promising West African deepwater market.”
Maersk Voyager is the last in a series of four ultra deepwater drillships in Maersk Drilling’s rig fleet. The rig was delivered on February 6, 2015 from the Samsung Heavy Industries (SHI) shipyard in Geoje-Si in South-Korea. The four drillships represent a total investment of $2.6 billion.