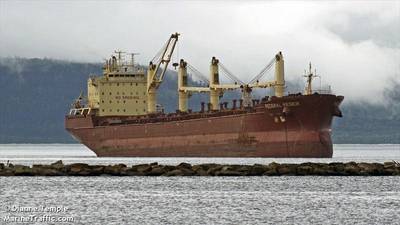 The first ‘saltie’ of the 2018 commercial navigation season is on its way to the Port of Duluth-Superior.

The 656-foot bulk carrier Federal Weser is scheduled to pass beneath Duluth’s Aerial Lift Bridge by 10 p.m. tonight and is expected to start loading Monday morning at the CHS terminal on the Superior side of the harbor. If all goes according to plan, the ship should depart late Tuesday or Wednesday with 21,400 metric tons of durum wheat bound for Algeria.

The Federal Weser, part of the Fednav fleet, last visited the Twin Ports in 2015. This year, the Marshall-Islands-flagged bulker stopped on its way to Duluth-Superior to deliver a load of steel in Sault Ste. Marie, Ontario.

The vessel has 22 crew members on board and is under the command of Captain Umesh C. Sharma. The local vessel agent is Daniel’s Shipping Services, and stevedoring is being handled by Ceres Terminals with tug assists provided by the Great Lakes Towing Company.

According to the Port of Duluth-Superior, Federal Weser appears to be the first of a half-dozen salties due to make their way to the Twin Ports via the Great Lakes St. Lawrence Seaway System during the next couple of weeks.

“Some of the world’s highest-quality grains move from farmers’ fields in Minnesota and North Dakota through the Port of Duluth-Superior to customers in countries across Europe, North Africa and points beyond,” said Kate Ferguson, director of business development for the Duluth Seaway Port Authority. “When it comes to shipping everything from agricultural products and iron ore to heavy equipment and project cargoes, the Port of Duluth-Superior literally links the heartland of North America to the world.”

Situated 2,342 miles inland from the Atlantic Ocean, the Port of Duluth-Superior anchors the westernmost edge of the entire Great Lakes-Seaway System, which reopened for business just a couple of weeks ago. The Soo Locks at Sault Ste. Marie, Mich., opened Sunday, March 25, with the American Century being the first upbound vessel to lock through. Four days later, the Seaway season got underway as the Algoma Niagara locked through the Welland Canal.

Early-season transits in the eastern end of Lake Superior and through the St. Marys River have been slowed by challenging ice conditions, but Canadian and U.S. Coast Guard icebreakers have been working in tandem to establish tracks and assist vessels through those sections.