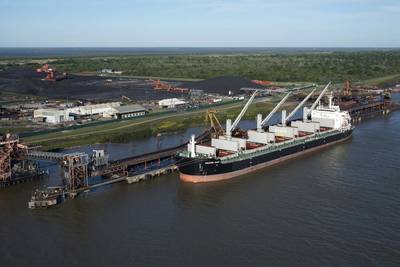 U.S. shipowner Eagle Bulk's 2018 decision to outfit the majority of its dry bulk fleet with scrubbers has proven to be an environmentally sound and profitable decision, with an expected payback on investment by the end of 2022.

Having already recorded $60 million of fuel savings, and with rising spreads between high-sulfur and low-sulfur fuels, Eagle Bulk expects to recoup its total scrubber outlay before year end.

"We're very happy with where we are, especially given the challenges of 2020 with COVID-19 and lower fuel spreads," Vogel said.

Vogel praised the CROE scrubbers, saying that they "were performing well beyond expectations, with some even cleaning to a level of 0.1% sulfur rather than the mandated 0.5%...their reliability has been outstanding."

A broad range of studies has shown that using high-sulfur fuel oil (HSFO) with a scrubber results in a lower "well to wake" carbon footprint than using very-low-sulfur fuel oil (VLSFO) or even marine gasoil (MGO). A paper published by the Elsevier journal Transportation Research suggests the switch from HSFO to VLSFO may have increased global carbon output by 323 million metric tons per year—almost one-third of shipping's carbon footprint—because of increased refinery emissions from the desulfurization process.

Seanergy Maritime Holdings Corp. announced Thursday it has agreed to acquire a secondhand bulk carrier from a Japanese owner.The 180…