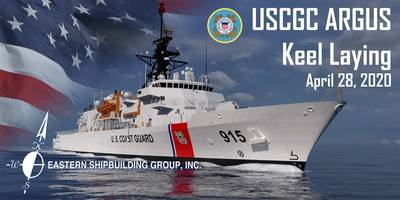 The ceremony was performed and recorded without audience to comply with CDC guidelines to combat the spread of COVID-19.

The keel laying represents the ceremonial start of a ship’s life by commemorating the assembly of the initial modular construction units. Historically, to attest that the keel was properly laid and of excellent quality, the shipbuilder would carve their initials into the keel. This practice is commemorated by welding the ship’s sponsor’s initials into the keel authentication plate.

The ship’s sponsor is Capt. Beverly Kelley, USCG (Ret.). Capt. Kelley was the first woman to command a U.S. military vessel as the Commanding Officer of the 95-foot patrol boat, USCGC Cape Newagen in 1979. Throughout her distinguished career, she became the first woman to command both a medium endurance cutter and a high endurance cutter in USCGC Northland and USCGC Boutwell respectively.

Eastern’s President Joey D’Isernia said, “Eastern Shipbuilding Group is humbled and proud to have been chosen to build this next generation ship for the world’s best Coast Guard, and we think today represents a milestone that all those involved in the program can be proud of.

“The steel joined here today is unlike any you or I have seen before. This steel has been ravaged by 162 mph winds, generated by the third most powerful hurricane to make landfall in this country’s history. This steel has borne witness to a Pandemic that has caused fear and shaken our core.

“But through all this, it remains sturdy, it remains resilient, and today it will join with other steel to become stronger, more defined, and more resolute. Today is representative of how we build, and of unwavering resolve in the face of adversity for a Coast Guard and a nation that deserves nothing less.”

Joey D’Isernia was accompanied on the podium by Capt. Andrew Meverden, representing the USCG, and Bradley Remick, the expert welder charged with welding the sponsor’s initials onto the ceremonial keel authentication plate.

The 360-foot OPC is designed to conduct multiple missions in support of the nation’s maritime security and border protection. The OPC will provide a capability bridge between the national security cutter, which patrols the open ocean in the most demanding maritime environments, and the fast response cutter, which serves closer to shore. The OPC design includes the capability of carrying an MH-60R or MH-65 helicopter and three operational Over The-Horizon small boats. The vessel is also equipped with a highly sophisticated combat system and C4ISR suite that will enhance capabilities to execute the service’s missions.

U.S. Coast Guard Commandant Adm. Karl Schultz said in his most recent State of the Coast Guard Address that the new OPC “will become the backbone of [the Coast Guard's] modernized fleet.”

“The first in its class, Cutter Argus, is already under construction and will be delivered in 2022. The Offshore Patrol Cutter program is set to deliver 25 hulls and that fleet will ultimately comprise almost 70% of our offshore presence.” Adm. Schultz said in February.

In April, the U.S. Coast Guard executed a modification to the contract for Eastern to build the second OPC and Long Lead Time Materials for the third, following completion of a Production Readiness Review (PRR) in February 2020.

In support of OPC construction, ESG has made improvements to the Nelson Street facility. In conjunction with the state of Florida and Triumph Gulf Coast, Inc., ESG has commenced construction on additional warehousing, a state-of-the-art C4ISR Production Facility, improved building and launch ways, among numerous other improvements. This wave of facility improvements positions ESG to continue OPC production as efficiently as possible.

Earlier this year Newport Shipping unveiled what it is calls a “first of kind, innovative online portal” that was designed…