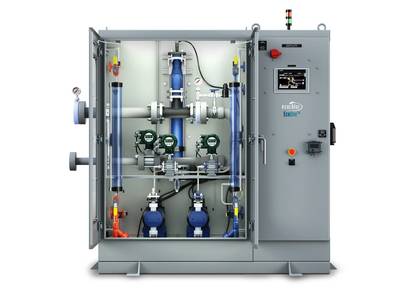 The EcoOne BWMS has been tested extensively to ensure that it works effectively as a single-step treatment, without a filter, under all operating conditions in brackish and marine waters in accordance with the USCG, Standards for Living organisms in Ship’s Ballast Discharged Waters, Final Rule (Final Rule). The IMO Type Approval Certificate was awarded in September 2021 demonstrating compliance with one of the most recent, stringent testing standards available in the industry.

“While we acknowledge that there isn’t any single BWMS that will fit all applications for every trade route, we now offer three variations of BWMSs - a filtered, filterless and hybrid version," said  Andrew Marshall, CEO, Ecochlor. "Add to that our powerful chlorine dioxide (ClO2) treatment technology - which is effective in all water conditions without any need for the crew to adjust operating parameters - and low cost. Accordingly, shipowners will no longer have to install BWMSs that are not optimal for their vessel or trade routes.”

Ecochlor’s three products incorporate ClO2 technology in different ways to provide shipowners flexibility in the installation and operation of their BWMS. Benefits to every Ecochlor system includes few main components to minimize breakdowns, no TRO sensors, no complex power or electrodes, no retreatment or neutralization at discharge, high flow rates (16,200 m3/h), an option to gravity ballast, and the lowest power requirements in the industry.

The Canadian Coast Guard is decommissioning its oldest serving vessel after 59 years of service.The offshore oceanographic…