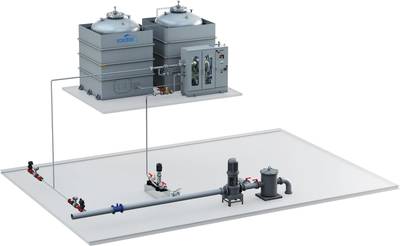 Ecochlor received IMO BWMS Code Type Approval for its EcoOne and EcoOne Hybrid BWMSs from the Norwegian Maritime Authority. This certification is an amendment to Ecochlor’s existing BWMS Type Approval and is in accordance with the recent and more stringent standards set by IMO Resolution MEPC.300 (72), Code for Approval of Ballast Water Management Systems (BWMS Code).

In September 2021 Eochlor received IMO BWMS Code Type Approval for these systems and are on track to get USCG Type Approval by the end of the year, according to the compnay.

Land-based biological efficacy tests were undertaken by the Golden Bear Research Center (GBRC) in California, USA. The Shipboard tests, undertaken by DHI as sub-laboratory, were completed to test the biological efficacy and related shipboard operational performance of the EcoOne BWMS on board commercial vessels. This testing was performed on two vessels owned by Maran Tankers, a VLCC and an Aframax, during their typical voyages.