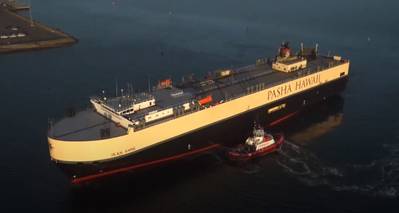 Pasha Hawaii's pure car/truck carrier (PCTC) Jean Anne has received an electronics upgrade, including the replacement of her navigation system.

The update was performed by Mackay Marine in Vancouver, B.C., in just under three weeks, including time for sea trial and crew training. Project Manager Ben Staggs, and installers Hamid Nayebi and Don Kamachi, handled the entire retrofit without complications, removing the older electronics and replacing them with all-new Furuno equipment.

Launched in 2005, the Jean Anne is a fully enclosed roll-on/roll-off (Ro/Ro) carrier that serves Hawaii from the U.S. mainland. She is capable of transporting 2,500 automobiles on her ventilated decks. Decks 4, 6, and 8 are reinforced for oversize cargo, such as construction, agricultural or military equipment, and can accommodate 125,000 square feet of such.