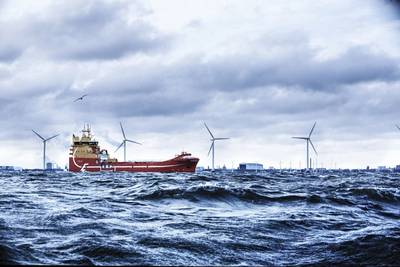 Eidesvik Offshore, a Norwegian offshore support vessel owner, has signed a deal with oil firm Aker BP and Alma to investigate the possibility of using Alma's fuel cell technology to accelerate the transition to zero-emission shipping.

Under the agreement, the companies will explore retrofit installation of Alma’s ammonia fuel cell technology on two offshore support vessels: Eidesvik-owned Viking Lady and Aker BP-owned NS Frayja currently under Eidesvik’s management, with the option to include further vessels in the scope of the project as well.

The agreement is part of Eidesvik and Aker BP’s joint technology project “Retrofit” which aims to reduce emissions from existing supply vessels.

Jan Fredrik Meling, CEO & President of Eidesvik said: "We are pleased and proud to have been selected as Aker BP’s preferred partner in this important step towards more sustainable operations. The agreement is a demonstration of Eidesvik and Aker BP’s clear desire and willingness to contribute to the development of a cleaner and more environmentally friendly shipping and offshore industry."

In the shipping industry, hydrogen and ammonia are considered the two main zero-emission fuel candidates for future shipping. Today, many believe that ammonia represents the best option for longer voyages, such as the North Sea supply routes, where ships need to carry large amounts of fuel, Eidesvik said.

“We believe there is a great potential for significantly reducing emissions from the existing fleet with new technology. For us, this MoU is a result of
Eidesvik’s long-term development program that has given us the knowledge and capacities needed to take on challenging and ground-breaking projects,” says Meling.

As reported recently, Meling will as planned, retire from the CEO position at the age of 65 effective December 31, 2021. Starting January 1, 2022, the company’s CCO Gitte Gard Talmo will replace Meling who has served as President & CEO since 2005.

U.S. crude oil production fell 3.5% in September after Hurricane Ida temporarily halted most crude production in federal waters of the Gulf of Mexico…