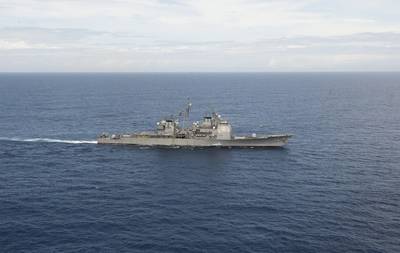 According to the U.S. Navy, its Ticonderoga-class guided-missile cruiser USS Vella Gulf (CG 72) will enter the Black Sea Friday, May 23, to promote peace and stability in the region.

Vella Gulf's mission is to work with NATO allies toward mutual goals, demonstrating the United States' commitment to strengthening and improving interoperability in the region, the Navy said. The U.S. Navy routinely operates ships in the Black Sea consistent with the Montreux Convention and International Law.

Vella Gulf, homeported in Norfolk, Va., is deployed in a multi-mission role in the U.S. 6th Fleet area of operations to contribute to regional maritime security, conduct bilateral and multilateral training missions, and to support NATO operations and deployments throughout the region.

U.S. 6th Fleet, headquartered in Naples, Italy, conducts a full range of maritime security operations and theater security cooperation missions in concert with allied, joint, and interagency partners in order to advance security and stability in Europe and Africa.