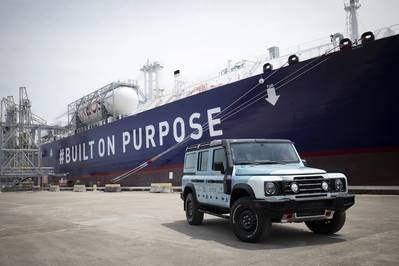 The Grenadier vehicle was dockside as the second of the world’s largest ethane carriers docked in Houston ahead of the naming ceremony. (Photo: INEOS)

One of the world’s largest ethane carriers was named Pacific INEOS Grenadier during a ceremony held Tuesday in Houston.

The 230-meter-long, 99,000 CBM very large ethane carrier (VLEC) and is the latest ship to join the INEOS fleet. It will be operated by Pacific Gas.

Built in Jiangnan, China, the ship is fitted with Type B tanks, a new design for transporting liquified ethane that optimizes vessel capacity. The ship also has the potential to carry other products such as liquefied petroleum gas (LPG) and ethylene.

At the ceremony, Randa Duncan Williams, chairman of the general partner of Enterprise Products, formally named the ship and became its official godmother. The vessel is named in honor of INEOS’ Grenadier 4X4 rugged off-road vehicle that is soon to launch in America.

David Thompson, CEO of INEOS Trading & Shipping, said, “Today’s ceremony was very special for INEOS. It highlights perfectly the immense breadth of the company which now spans from chemicals and energy, to fashion and automotive. Seeing the Grenadier 4X4 next to the VLEC was simply spectacular. In February this year we launched the Pacific INEOS Belstaff, then the world’s largest ethane carrier, and today alongside our highly anticipated Grenadier 4X4 we have added the second of the world’s largest VLECs to our growing fleet.”

The INEOS ethane fleet now consists of 12 vessels including four VLECs, and eight ‘Dragon’ ships. The Dragon ships have been regularly transporting ethane across the Atlantic for over six years.