The Ever Given is on the Move; the Suez Canal Reopens 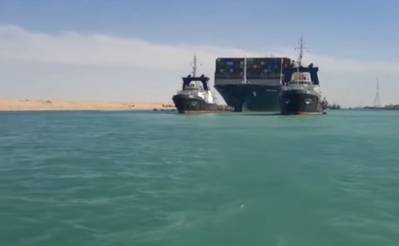 A largescale salvage operation has freed one of the world's biggest containerships from blocking global trade through the Suez Canal, services firm Boskalis said Monday, enabling the resumed flow of maritime commerce through one of the world’s most important shipping arteries.

At high tide on Monday, a team of tugboats was able to dislodge the 20,000 TEU Ever Given's bulbous bow from the bank of the canal where it had been stuck for nearly a week. The ship had been partially refloated earlier in the day after approximately 30,000 cubic meters of sand was dredged and 11 harbor tugs and two seagoing tugs Alp Guard and Carlo Magna were deployed to help free the grounded vessel.

Authorities said the fully laden 224,000-ton containership is now fully refloated, and AIS ship tracking data shows the ship is moving toward the center of the canal. Ever Given is being towed to the Great Bitter Lake where it will undergo technical inspection, the Suez Canal Authority said.

With the 400-meter containership now out of the way, the canal is free to reopen for vessel traffic. The canal linking Europe and Asia had been shut since March 23, holding up more than 50 ships and $9 billion in trade per day.

More than 350 vessels—including other containerships, oil tankers, gas carriers, bulk carriers and livestock carriers—have piled up at either end of the canal waiting to transit in both directions, and it is expected the traffic jam will persist for weeks. Dozens of ships have already opted to take the 5,000-kilometer alternate route around Africa, adding time and increased costs to their voyages.

The global trade disruption, which comes as the shipping industry continues to grapple with the coronavirus pandemic and other logistical bottlenecks around the world, could take weeks or even months to clear.

The official cause of the Ever Given grounding is still unclear, but initial reports suggest the Panamanian-flagged vessel went off course and struck the bank of the canal amid strong winds and low visibility.