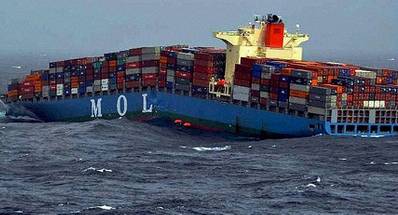 Following the loss of the container vessel MOL Comfort on June 17, 2013, ClassNK established a special Casualty Investigation Team in order to investigate and determine the cause of the casualty.

Japan’s Ministry of Land, Infrastructure, Transport and Tourism (MLIT) further established a Committee on Large Container Ship Safety to develop measures to ensure the safety of large container vessels on August 29, 2013. ClassNK serves as a member of the Committee and the ClassNK Casualty Investigation Team is actively involved in its deliberative and investigative work.

The Committee on Large Container Ship Safety completed its Interim Report on the MOL Comfort casualty during its fourth meeting on December 12, 2013, and released the report to the public on December 17, 2013.

The report recommends conducting tests on the vessel's sisterships and other large containerships to verify investigation results and ensure further safety measures are developed.

In line with Interim Report, the ClassNK Casualty Investigation Team will continue to carry out numerical simulations of hull strength and acting loads, as well as conduct full-scale stress measurements of actual ships in order to develop comprehensive measures to ensure the safety of large container vessels, including potential amendments to existing classification rules related to hull structures.