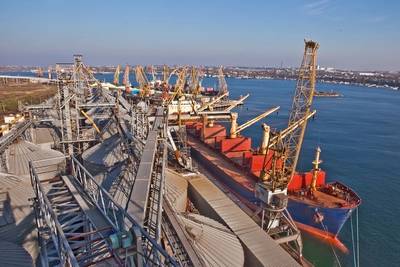 The Baltic Exchange is looking into launching freight indexes for grains and liquefied natural gas (LNG) as the London-run business targets new markets after its acquisition by Singapore Exchange last year, the Baltic's chief executive said.
Founded in 1744 as a forum for chartering vessels, the Baltic Exchange now produces benchmark indexes for global shipping rates and owns a trading platform for the multi-billion dollar freight derivatives market.
SGX's ownership of the Baltic has enabled the exchange to set its sights on developing new areas, especially in Asia - a region which is set to drive seaborne trade going forward, the Baltic's CEO Mark Jackson told Reuters.
"They (SGX) are looking at a long-term goal - this is about improving the maritime footprint in Asia and the Baltic is a vehicle for them to do that," Jackson said in an interview.
"They are looking at me to give them a return on their investment."
SGX completed its 87 million pound ($111 million) acquisition of the Baltic in November last year.
Jackson, who took the helm earlier this year, said the Baltic was looking into creating a new benchmark route from South America or the United States to China specifically for grains.
Profitability for the world's biggest agri-business players including U.S. group Archer Daniels Midland Co and rivals such as Bunge Ltd has been battered by thinning margins due to a global grain glut.
Jackson said the potential for such a freight benchmark for grains would be in providing more volatility, adding it was "a trading opportunity".
Many shipping markets are struggling with a near-decade long downturn with companies trying to find ways to boost bottom lines.
Jackson said the Baltic was also looking into creating LNG freight rates for specific routes, which would mark another new direction for the exchange.
He said such a freight benchmark would support SGX's existing spot LNG pricing, which would help to develop Singapore's wider plans to become a bunkering hub for LNG as a marine fuel.
The Baltic offers a variety of freight indexes focused on the shipping of dry bulk commodities such as iron ore, coal and grains as well as for oil tankers and for liquid petroleum gas (LPG).
"Expanding our container footprint is something we need to do," Jackson said, adding he did not rule out a move into other areas such as air freight going forward.
(By Jonathan Saul; Editing by Mark Potter)