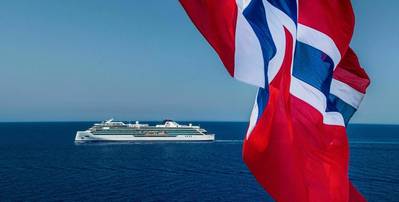 The vessel is 205 meters long with a 23.5 meter beam and is ice-strengthened Polar Class 6 for expeditions in the Arctic, Antarctica and North America’s Great Lakes. It features a straight bow, longer hull and state-of-the-art fin stabilizers that allows it to glide over the waves, with u-tank stabilizers to decrease rolling when the ship is stationary, VARD said. The ship hosts 378 guests in 189 staterooms.

Attilio Dapelo, General Manager for Business Unit Cruise in VARD, said, “Viking Octantis is an amazing and unique ship, the very first in its class. It has been an exciting and challenging process to develop and build this vessel, and I would like to thank the Viking team for the trust and excellent cooperation. With its length of more than 200 meters, is Viking Octantis the largest vessel built by VARD so far, and I would like to express my gratitude to each and everyone involved in the project for their dedicated effort and commitment to secure delivery according to plan.”

VARD signed the letter of intent (LOI) for the two cruise vessels with Viking in April 2018. The contracts for the vessels became effective in July 2018. On December 22, 2020, the float out ceremony of Viking Octantis took place at Vard Tulcea in Romania. The vessel arrived Vard Søviknes in Norway in July 2021 for further outfitting, testing and finalization.

Several of VARD’s and Fincantieri’s specialized subsidiaries were among a broad range of suppliers and partners involved throughout the shipbuilding process. VARD said more than 1,000 workers were on board during the final outfitting phase stage.

Arnt Inge Gjerde, Yard Director at Vard Søviknes, said, “We all had one common goal – to deliver the vessel before Christmas. And we did it! Despite all the challenges posed by the pandemic, we have nevertheless managed to complete the building, outfitting, testing and successful sea trial of the vessel. We are all looking forward to seeing Viking Octantis in operations. She will be a fabulous experience for the passengers on board and a great workplace for its crew.”