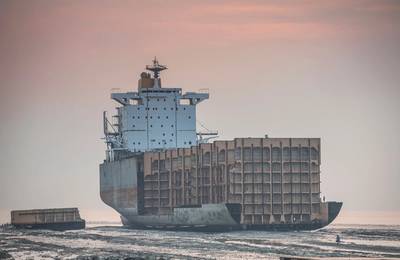 Fears and concerns across the sub-continent recycling markets continue to grow as local currencies across all major ship-recycling destinations continue to worryingly depreciate by the day and some even tougher restrictions reportedly set in place on the opening of fresh Letters of Credit (L/Cs) in Bangladesh this week, as the foreign currency crisis in the country deepens further.

In fact, the currencies have been such a source of frustration for the ship recycling community that the U.S. dollar transactions are getting uncontrollably out of hand. The Pakistani Rupee has depreciated by a whopping 44% since the start of the year and shows few signs of stabilizing just yet. Bangladesh too has not escaped the forex collapse and remains in a perilous state. In fact, this week, the Bangladeshi government has applied to the IMF for a $4.5 Billion bailout, with the economic crisis continuing to eviscerate ‘non-essential’ large dollar value international trade.

Moreover, on the Bangladeshi L/C front, any L/C over $3 million now has to be approved by the Central State Bank – this is down from the $5 million limit imposed just last week and illustrates just how grave the situation is locally. Inflation in Bangladesh too is the highest it has been for a decade at about 7.50% whilst the Bangladesh Taka has depreciated by about 11.5% in the year to date in further troubling signs.

India, ironically (given it’s volatile steel plate prices), remains the strongest and most resilient economy, but it is hardly encouraging to see competing markets in such dire straits, with talks plaguing the region that a similar collapse as that seen recently in Sri Lanka could be a serious possibility for those under siege countries.

Finally, in Turkey, the situation is mirroring the Pakistani market, with weakening steel plate prices and a currency that seems doggedly intent on breaching TRY 18 at some point.

As such, ship recycling is taking a backseat to these far more prescient worries at the moment – with nearly no new sales at least troubling recyclers for the time being.