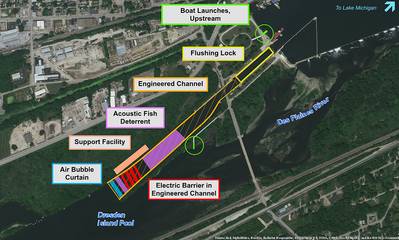 The Brandon Road project is on the Des Plaines River, in Joliet, about 50 miles downstream from Chicago. That location offers a last chance to keep Aquatic Nuisance Species (ANS) out of the Great Lakes. The Army Corps explains that a “new structural control point would include the Technology Alternative Acoustic Fish Deterrent with Electric Barrier, which includes, a bubble curtain, an engineered channel, an electric barrier, and flushing lock.” This would “to the maximum extent possible” reduce the chances that ANS get established in the Great Lakes Basin while still providing for continued navigation.

Brandon Road was authorized in WRDA 2020. It was to start with $29 million for Pre-Construction Engineering and Design (PED). However, unresolved state-federal cost sharing has been an issue, noted as recently as a January 12, 2022, Corps update. Total project cost is $858 million.

In December, the Council of Great Lakes Governors sent a letter to Congressional infrastructure leadership seeking full federal funding in WRDA 2022 for Brandon Road. They write that the state’s project cost, part of an 80/20 federal-state split, was “beyond the capacity of the Great Lakes States to match.”

The letter was timely. On January 19 the Corps included Brandon Roads on a project list for Infrastructure Investment and Jobs Act funds. The FY 2022 amount is $225.8 million, enough to complete PED and start construction. Critically, however, the 80/20 split remains, meaning Illinois needs to pony up over $45 million. In an email the Corps explained: “Use of this federal funding is contingent on signature of a Project Partnership Agreement with the non-federal sponsor and allocation of the funding which would be split as an 80% federal, 20% non-federal cost share.” That’s rather sobering. This may still be in flux – watch for updates!