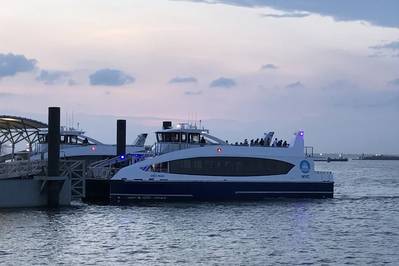 New routes, new challenges and plenty of newbuilding as 2017 gives way to the New Year.

A year ago, the maritime industry could be found clinging to the edge of their seats to see what the coming year had in store. 2017 was set to be a telling year and indeed it was. With the elections finalized, the political impact, if any, was sure to be seen. While fuel prices have remained low and continuing to hamper the offshore workboat market, consumer confidence has held high and new vessel construction is strong – particularly in the ferry segment.
The need and recent demand for new ferries goes beyond in-kind vessel replacement. That’s because the trend is for expanded routes, more frequent service, larger vessels, and in some cases the establishment of a startup service with a new service provider. Coupled to each of these requirements is often an aggressive timeline and tight budget – both of which have been the case for the startup of the NYC Ferry service on the East River in Manhattan.
New Routes: Horses for Courses
The scope of the project was vast, but it appears that San Francisco based Hornblower Cruises and Events was indeed able to fill the role of ‘Ferry Godfather’ and pull off this Cinderella story at the eleventh hour. While the overall service has proven to be popular, the NYC Ferry has experienced some shoe-fitting challenges along the way – including the need for additional vessels. Like their fellow New Yorkers, Hornblower has remained resilient in charting a course for success for this new service.
Elsewhere, Potomac Riverboat Company in Alexandria, Va. also took on a brand new ferry route, servicing the recently opened Washington, D.C. Wharf harborside development. In order to address the challenge of transiting low-clearance bridges along the route, the fleet of four 88’ aluminum catamarans built by Metal Shark all feature folding rails on the upper passenger deck.
Kitsap Transit in Washington’s Puget Sound also kicked off a new ferry service from Bremerton to Seattle last year and is in the midst of constructing and procuring six new vessels to grow their fleet and incorporate two additional routes. Kitsap Transit’s new ferry fleet is shaping up to be one of the most diverse. Their construction program includes two ultra-low-wake ferries for their wake sensitive Rich Passage run, a diesel-electric hybrid ferry for the short commutes to Port Orchard and Annapolis, and three new Tier IV-powered high speed 250-passenger subchapter K ferries for voyages from Southworth and Kingston to downtown Seattle.
Separately, the National Park Service is also in the hunt for a new ferry operator to run their new ferry service from Pensacola to Fort Pickens and Pensacola Beach. Early in 2017, All American Marine delivered two new 72’ aluminum catamaran 149-passenger ferries that are currently in dry storage while NPS selects a concessionaire to operate the service and the necessary shore side infrastructure is put into place.
A Course through Choppy Waters
2017 has been a year of development and growth, but it was not smooth sailing for all on the ferry front as various vessels experienced a few rocky runs. Nevertheless, members of the Passenger Vessel Association (PVA) can claim one of the best track records for maritime and transportation related casualties.
Human factors are most often to blame which raises some eyebrows as to whether a safer vessel can be built and additional training can be garnered to help avert potential incidents. Organizations such as PVA, Interferry, and the Worldwide Ferry Safety Association (WFSA) are all centered on the premise of safe ferry operations. Industry conferences bring vessel operators, government regulators, and supply chain stakeholders together to present new ideas and vet lessons learned – moving the industry forward. This year will be no different.
During last year’s Ferry Safety and Technology Conference, organized by WFSA, several presentations advance the goal of safer navigation and landings. Dr. Martha Grabowski of Le Moyne College, for example, gave an insightful presentation on the use of wearable, immersive, augmented reality devices for marine navigation. Through smart glass technology, there is potential for operators to physically see their operating environment with superimposed real-time digital navigation aids.
Still under development, the technology could someday give the master an overlay of a navigation chart plot, forward looking radar images for debris detection, or even water depth data without having to divert focus. This technology also shows potential to reduce distracted driver issues by ensuring that the master stays visually focused on the appropriate targets to avoid triggering alarms. Separately, ‘Geofencing’ can be employed to define safe courses, helping keep vessels from straying from charted channels. Furthermore, every safe voyage must conclude with a safe pier landing.
Shea Thorvaldsen of McLaren Engineering group presented several developments in shoreside infrastructure that promote softer landings through impact-dampening fendering and provision for safer access for passengers with height adjustable ramps and stability-enhanced floating platforms. This may eventually yield proximity sensors and auto pilot controls specifically developed to aid in automated docking or collision avoidance.
The New Year promises continued growth in the construction of ferries, expansion of routes, and the addition of new operators joining the fleet. When embarking on a new voyage, the safest course is a charted course and there are plenty of aids to assist owners and operators along the way.
Consider attending PVA’s annual conference at Maritrends in Savannah, Ga. in January; the Ferry Safety and Technology conference in Manhattan in March; or the 2018 Interferry Conference to be hosted in Cancun in October. Investing in new vessel construction can be daunting and can at times toss a few heavy seas or rogue waves your way, but partnering with an experienced shipyard with a reliable track record for delivering U.S. Coast Guard inspected ferries will certainly help calm the storm. Partnerships will be key to setting sail on a safe and successful 2018.
The Author
Joe Hudspeth is VP of Business Development at All American Marine. He currently serves as a regional co-chairman for the Passenger Vessel Association and participates on several PVA committees. Reach him at jhudspeth@allamericanmarine.com
(As published in the January 2018 edition of Marine News)