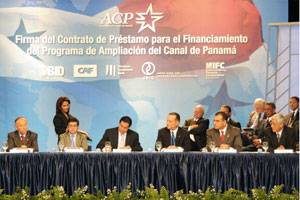 In an official ceremony held at Panama’s Ascanio Arosemena Auditorium, Mr. Alemán Zubieta and top executives from the five agencies signed the agreement to officiate the financing package, which will cover a portion of the $5.25b Canal Expansion Program. President Torrijos also signed the agreement as an honorary witness.

Expansion will build a new lane of traffic along the Panama Canal through the construction of a new set of locks, which will double capacity and allow more traffic and longer, wider ships.

The ACP is the autonomous agency of the Government of Panama in charge of managing, operating and maintaining the Panama Canal. The ACP is governed by its organic law and the regulations approved by its Board of Directors.