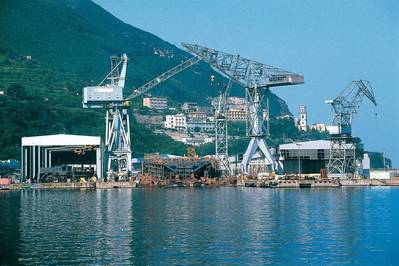 The European Commission said the deal between two global leaders in an already concentrated and capacity-constrained market could push up prices for cruise ships as it began an investigation on Wednesday.

Italy is hoping the deal will help Fincantieri, Europe's biggest shipyard, ward off competition from Asia and other regions.

The French finance ministry said it remained in favour of the deal.

"We are convinced that consolidation in the European shipbuilding sector is necessary to boost its competitiveness and generate the resources to fund innovation in view of competition, notably Chinese," a ministry spokesman told Reuters.

The Commission said it was unlikely that the entry of other ship builders to the market would offset the possible negative effects of the deal, confirming a Reuters story on Oct. 29.

Fincantieri has argued that Asian shipyards could pose strong competition in the next decade to try to allay the Commission's worries. Sources told Reuters the deal would reduce the number of players from three to two.

"We will carefully assess whether the proposed transaction would negatively affect competition in the construction of cruise ships to the detriment of the millions of Europeans taking cruise holidays every year," European Competition Commissioner Margrethe Vestager said.

The EU competition enforcer will decide by March 17 whether to clear or block the deal.

Fincantieri is unlikely to secure approval without giving concessions but it is not clear what these could be without jeopardising the value of the acquisition.

Chantiers, previously called STX France, is based in Saint-Nazaire in western France and is the only shipyard big enough in the country to build aircraft carriers and other large warships, making it a strategic national asset.