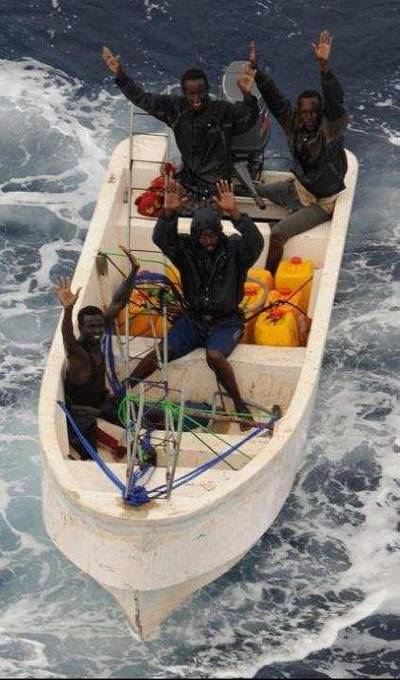 At first light on 12 January 2012, having just completed the escort of a World Food Programme ship carrying food-aid into Somalia and while operating close to the Somali port of Mogadishu, the EU NAVFOR Flagship, the ESPS PATINO, was approached by one skiff with a group of suspected pirates onboard.

The suspected pirates opened fire with light calibre weapons and tried to board the PATINO. The ship’s force-protection team returned fire in self-defense and the ship’s helicopter was launched. The skiff broke off the attack and the men surrendered to the helicopter after throwing their weapons, ladder and fuel barrels overboard. Five of the six men who were in the skiff had received injuries, two of which required medical treatment onboard the SPS PATINO. Investigations are ongoing to check whether the suspect pirates’ report that a seventh man who had been in the skiff and who was lost overboard during the attack are correct.

EU NAVFOR Somalia
EU NAVFOR Somalia - Operation ATALANTA's main tasks are to escort merchant vessels carrying humanitarian aid of the 'World Food Program' (WFP) and vessels of 'African Union Mission in Somalia' (AMISOM), and to protect vulnerable ships in the Gulf of Aden and Indian Ocean and to deter and disrupt piracy. EU NAVFOR also monitors fishing activity off the coast of Somalia.