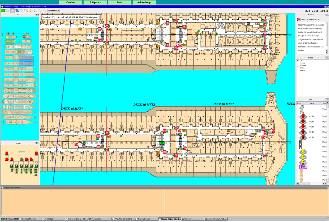 FLAGSHIP, the pan-European maritime transport project part funded by the EU, has developed an integrated, ship to shore system, for the control and monitoring of passenger safety functions on board ship utilising both fixed and mobile assets.  Called FLAGSHIP-ISEMS (Integrated Safety and Emergency Management System), the system enhances the onboard ability to handle emergencies while also making full use of real-time communication between the ship and onshore facilities.  Both parties have a full overview of the actual situation and can exchange requests, advice and instructions in real time. This enables effective assistance from on shore teams in an emergency situation as well as making drills and training much more effective.

Incidents on large passenger ships need to be handled effectively to avoid their escalation in to serious emergencies.  With the new generations of very large ships, this involves support functions residing on shore as well as with the crew on the bridge, and in the engine and hotel sections. The FLAGSHIP-ISEMS software evaluates how available information can be best utilised in a co-operative decision support regime between the ship and its shore based organisation on one side and other interested parties, such as port and coastal authorities.

An important part of emergency preparedness is training and drills and FLAGSHIP-ISEMS allows a much more holistic approach. It will record the development of any situation – emergency or drills - including deployment of resources and use of the safety management systems. This can be used to analyse the improvement potential as well as develop new and improved training scenarios. If an accident should occur, the system will also record the development of this scenario and enable valuable lessons to be learned.

Per Norman Oma, Section Manager, Software for Autronica Fire and Security AS and FLAGSHIP partner said: “The FLAGSHIP-ISEMS project team has developed new concepts to enable such ship to shore cooperation, mainly based on a new and innovative electronic plotting table and associated applications. The results have been well received and elements have already been implemented on board ships in service.”

Mr Herman de Meester, Coordinator of FLAGSHIP commented: “The shipping industry always works hard to meet and exceed performance standards. The adoption of specific learning in to new products for the advancement of the industry is exactly what EC projects such as these are all about and are to be welcomed and encouraged.”

FLAGSHIP–ISEMS was led by Autronica from Norway. The project was supported, delivered and trialled in conjunction with Lodic and MARINTEK, both also of Norway; Minoan Lines of Greece, BMT in the UK and CONSAR in Italy.