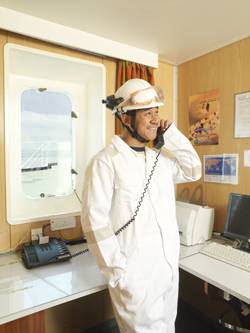 Stratos Global, the leading global provider of advanced mobile and fixed-site remote communications solutions, today announced it has been selected by Sandigan Ship Services, Inc. to deploy the Inmarsat FleetBroadband satellite communications service on Sandigan’s fleet of commercial vessels. Based in The Philippines, Sandigan manages a global fleet that includes bulk carriers and car carriers. FleetBroadband from Stratos already has been successfully deployed on 12 Sandigan vessels. Deployment on the remainder of the fleet is expected to be completed by the end of this year.

The Sandigan contract is the latest example of Stratos’ successful deployment of FleetBroadband on a wide range of vessel types across all major geographic regions. Stratos has activated more than 9,000 FleetBroadband terminals worldwide. By ensuring reliable broadband connectivity at sea, FleetBroadband from Stratos is helping Sandigan achieve optimal vessel performance, improved business operations and increased crew productivity. For Sandigan, Stratos fully integrated FleetBroadband with its sophisticated AmosConnect application, to improve management of all interoffice communications.

Sandigan also improves crew welfare by deploying Stratos’ AmosConnect Crew CommCenter. The solution enables personnel at sea to stay in contact with home via calling, private email and SMS at affordable, flat global rates. The solution’s high functionality helps retain qualified seafarers. The application features an easily manageable, separate account for each crewmember. The integrated communications solution that Stratos is deploying for Sandigan includes an Inmarsat IsatPhone Pro satellite phone on each vessel, for backup voice communications. An IsatPhone Pro is installed at Sandigan’s headquarters office as well. Sandigan also is deploying Stratos’ GSM Oceanwide solution, which enables crewmembers to use their personal GSM phones to communicate with family and friends by voice and SMS.

This deployment for Sandigan includes the full range of The Stratos Advantage value-added services for which Stratos has become well known. Those services – which are helping Sandigan attain the highest possible FleetBroadband performance, security and cost control – include the online Stratos Dashboard, which provides Sandigan with cost and traffic control, online invoicing, firewall management and many other benefits. “FleetBroadband from Stratos is meeting our high expectations by enabling us to achieve faster data transmission and better voice quality than the systems we previously used – at a lower cost,” said Sandigan President, Capt. Tomoyoshi Yanagita. “The service has increased the performance of many of the IP-based applications on which we depend. This has enabled us to improve business management.”

Capt. Yanagita added, “Stratos provided a comprehensive approach to this deployment. Their Singapore support team analyzed our data traffic and provided a range of options. They patiently helped us reduce communications costs and improve the performance of critical applications such as BASSnet, our planned maintenance software. Stratos President and CEO Jim Parm said, “This FleetBroadband solution is carefully designed to help Sandigan meet its objective of deploying the latest integrated management systems to achieve the highest levels of customer service. We look forward to helping Sandigan use our expanding range of new applications to maintain high operating efficiency and a competitive advantage.”

For Sandigan, this FleetBroadband system provides an optimal data connection for numerous other onboard applications, including planned maintenance systems, purchase systems and remote management – which allows Sandigan headquarters personnel to manage the ship’s computers without visiting the vessel.