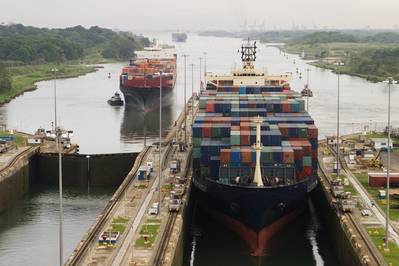 The Panama Canal moved more than a half a billion tonnes of goods over the last year, the canal's top official said on Thursday, marking a record high for the key global waterway as international trade picked up.

Ricaurte Vasquez, the Panama Canal Authority's administrator, told reporters during a webcast news conference that 516.7 million tonnes of goods passed through the century-old waterway during the 2021 fiscal year, which ended in September.

"It's been an exceptional year," he said, noting it was the first time the canal transported more than 500 million tonnes of goods during the 12-month stretch.

Ferried on massive cargo ships through the 50 mile (80 km) trans-oceanic canal, the 2021 fiscal year haul amounts to about 3.5% of the world's maritime trade, dominated by grains and petroleum products like crude oil and gasoline.

Vasquez explained that the new record was powered by larger ships carrying more containers, as well as sharp growth in the transport of Asia-bound liquefied natural gas, or LNG.

The 2022 fiscal year, which began at the start of this month, is forecast to see even more goods transported through the canal, or about 535 million tonnes, added Vasquez.