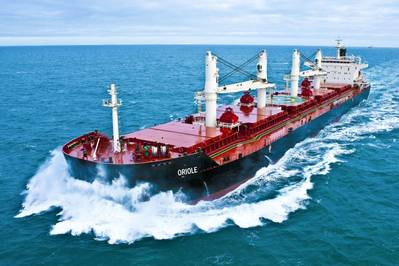 The Q4 bounce – a seasonal staple of the dry bulk markets – looks likely for Capesize and Panamax segments, but the effects may be limited.

Independent research and consultancy firm Maritime Strategies International (MSI) is forecasting a fourth quarter bounce in dry bulk market earnings, driven by improving iron ore, coal and grain trades.
In its latest Dry Bulk Freight Forecaster, MSI sees positive signs beyond the traditional summer lull in chartering activity for both the Capesize and Panamax sectors. However, the geared bulker segment will see slim opportunities with fundamentals weakened by strong vessel deliveries.
With the vacation season keeping downwards pressure on earnings in the short term, market sentiment for Capesize spot rates in Q3/4 has dropped over the last month.
But MSI remains more positive than the Forward Freight Agreement curve which itself is indicating a substantial improvement in sentiment. The August Capesize Timecharter Average contract was marked at $4,525 on August 17 by Freight Investor Services and the Q4 contract at $8,250. MSI predicts an average spot earnings level for a modern Capesize in October 2016 of $10,400.
Will Fray, Senior Analyst, MSI said, “Contrary to recent reports, vessel movements data shows that Roy Hill’s new iron ore operation in Western Australia is ramping up more quickly than expected and should reach just below its maximum capacity by December. Seasonal coal trade should also provide some support for Capesize shipments into China. We continue to forecast Capesize spot rates over $10,000 /day in October, but rates will most likely drop early in the new year on seasonal trade weakness.”
In the Panamax market, the FIS forward curve was marked on August 17 at $5,550 for the August TC contract and $6,625 for the Q4 contract. MSI forecasts an average spot rate in Oct of $7,000. The recent strength in Chinese and Indian coal imports have diverging causes and may cancel each other out as China’s stronger imports hold up India’s fall over the near-term. However, winter stockpiling demand in the rest of Asia should support Panamax demand in Q3/4 this year.
Near-term support will also materialize from US grains exports, with The International Grains Council making a 6 percent upwards revision in its estimates for 2016/17 U.S. wheat and coarse grain exports and a 10 percent cut to Brazilian corn production.
In the Handymax/Supramax segment however, hopes for a resumption in bauxite trade from Malaysia have diminished with another extension of the ban on production until mid-September. Beyond stronger US grains exports in August/September, there appear to be slim opportunities for the geared bulker segments over the next six months, with market fundamentals weakened by strong vessel deliveries. MSI’s forecast for Supramax spot rates puts October rates below July levels, falling to below $6,000/day in the new year.