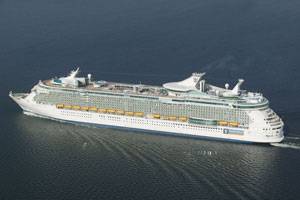 At 160,000 GRT and a capacity of 3,634 guests, Independence of the Seas features: a FlowRider surf simulator; the H20 Zone water park with its interactive sculpture garden for families and toddler pool; cantilevered whirlpools suspended 112 ft. above the ocean in the adults-only Solarium; a full-size boxing ring and a 14-person family suite.

Independence also features some of the other distinctive offerings the global cruise line is known for including, an ice-skating rink; a rock- climbing wall; an award-winning youth program; fine to casual dining venues; Broadway-style entertainment and the Royal Promenade - an entertainment boulevard stretching the length of the ship with shops, restaurants, bars and lounges, which provides guests with an endless variety of choices and experiences to suit their taste and preference.