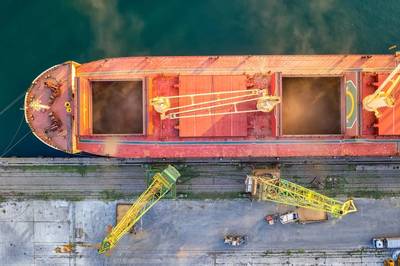 Nord Cereales, which runs France's third largest grain export silo at Dunkirk port, has shipped its biggest volume in over 10 years for the first five months of the season, it said on Friday, illustrating a fast pace of French exports.

Between the start of this season on July 1 and the end of November, Nord Cereales exported more than 1.2 million tonnes of grain, it said.

This is a turnaround after the silo operator recorded a 30% fall in exports to 1.6 million tonnes over the full 2021/22 season due to a disappointing harvest, the COVID-19 pandemic and renovation work, it said.

France saw a brisk start to its grain export season as war disruption to Black Sea trade led importers to turn more to western European supplies. In recent weeks, traders have also reported large French wheat sales to China, with volumes reported ranging between 400,000 and 700,000 tonnes. Expectations that most of the volume was for shipment this month fuelled a spike in December wheat futures BL2Z2 on Euronext.

GRA/EU A vessel is due to call at Dunkirk on Dec. 9 to load 25,000 tonnes of wheat for China, after taking 40,000 tonnes at Rouen, according to Refinitiv port data. GRAIN/SHP/FR Nord Cereales did not provide details of its exports so far this season, but China has become its main destination by far in the past years, with 1.2 million tonnes exported to the Asian giant in 2021/22 and 1.6 million in 2020/21.