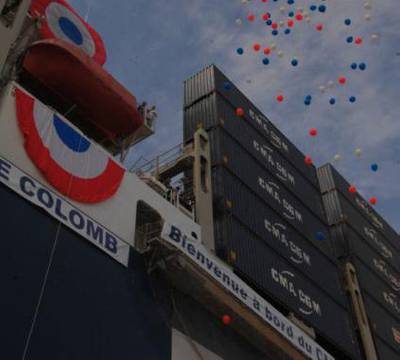 The first of a series of eight vessels named after great explorers, this giant of the seas is the largest containership ever to sail under the French flag. These very large ships will enable the Group to enhance its business model and improve its competitiveness.

She is also a new generation vessel equipped with the latest environmental technologies, such as:
> An electronic injection engine, which significantly reduces bunker fuel and oil consumption, while enabling the ship to operate at ecospeed, thereby reducing carbon emissions.
> Double-hull protected bunker tanks.
> The Fast Oil Recovery System, an innovative process for preventing marine pollution.

The CMA CGM Christophe Colomb will eventually be deployed on the FAL 5 (French Asia Line) service on the Asia-Europe trade, one of the world’s largest container shipping markets. She will call at the following ports: Ningbo, Shanghai, Yantian, Tanjung Pelepas, Port Kelang, Le Havre, Hamburg, Rotterdam and Zeebrugge.

Launched in early July, the FAL 5 service has extended the Group’s range of shipping solutions. Today, CMA CGM offers 10 services between Asia and Northern Europe, with capacity to carry 22,000 containers a week, thus strengthening its position as the market’s leading operator.

The vessel was christened at a time when CMA CGM Group has confirmed the sharp recovery in its business since the beginning of the year. Over the first quarter of 2010, volumes carried rose 21% compared with the year-earlier period, while EBITDA stood at $380m, up $640m year-on-year and in line with first-quarter 2008. Quarterly revenue was up by 29% to $3.2b. Second-quarter results will exceed first-quarter figures.