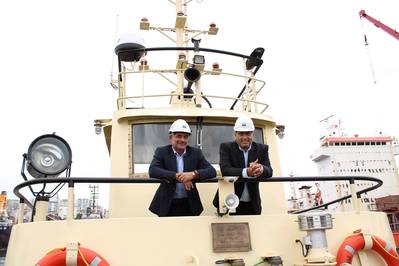 Reflecting its now dominant role in the international tug bulding market, Sanmar Shipyards in Turkey has taken the decision to significantly strengthen its team of executive directors with the appointment of two widely experienced men to bolster the existing board's range of experience and expertise.

Although recruited independently, by some strange coincidence, the two new appointees first met as eleven year old boys. They had both been selected for a special training program preparing students proposing to take entrance examinations for foreign High Schools established in Turkey.

Kerim Kazgan fancied the American School, following the footsteps of his mother, yet ended up in a French one, whilst Hakki Cek, who had hoped to attend a French school went to an American establishment. Both finally reached an ex-American College in Istanbul but studying different subjects.

Kazgan graduated in Business Administration and Cek in Economics and both joined different companies which today have been absorbed into Ernst & Young. Kazgan ventured off to the United States to deepen his academic knowledge whereas Cek stayed in Europe working in the United Kingdom, France and Austria.

Following the acquisition of a wealth of experience in a variety of companies and industries, now aged 56 and 57, both men saw the opportunity offered by joining Sanmar Marine, one of the most progressive enterprises in Turkey with a truly international reputation. Fate has determined that the two men can renew their boyhood friendship by joining the Sanmar family.