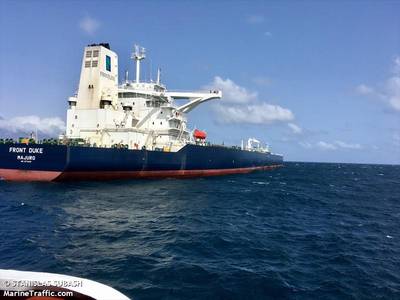 The oil and gas shipping firm said its board had appointed Lars H. Barstad, Frontline's commercial director, to take the role as interim chief executive officer of Frontline Management AS.

"With his solid background within the industry and his profound understanding of the company and its organization the board is confident that this new appointment will ensure a successful and seamless transition of the role," Frontline said.

The outgoing CEO Macleod will be available for Frontline until April 30, 2021.

Billionaire shipping magnate and Frontline chairman John Fredriksen said, "I would like to thank Robert for his contribution to Frontline. He has led the company through a period of significant fleet growth and renewal. I wish Robert continued success in his future endeavors."

"I have thoroughly enjoyed the last six years at Frontline, working with a great team through often volatile market conditions," said Macleod who in August reported that Frontline's first-half earnings had been "the strongest in more than 10 years."

Frontline, which specializes in the transport of oil crude oil and refined products, owns and operates a large fleet of vessels within the VLCC, Suezmax, and Aframax/LR2.

Macleod added, "The organization is best-in-class, and Frontline's scale and presence in the tanker industry is unrivaled. I am grateful to the board of directors for the opportunity to lead the company over the last six years and would like to express my sincere gratitude to my friends and colleagues who have contributed to Frontline's success during my tenure."

Macleod has been a director of Frontline since May 2015 and served as CEO of Frontline Management AS since November 3, 2014. Previously, he was employed by the AP Moller Group from 2002 to 2004 and Glencore-ST Shipping from 2004 to 2011. He is also the founder of Highlander Tankers AS.

The newly appointed interim CEO Barstad said, "I am grateful that the board has given me the trust to take the role as interim CEO of Frontline after having served with the company for five years in various positions. It is exciting times ahead in the tanker market in which I will do my utmost to make sure that Frontline continues building shareholders' value."

NAVTOR has opened a new office in Gdansk, Poland, dedicated to accelerating development of cloud-based and AI solutions and…