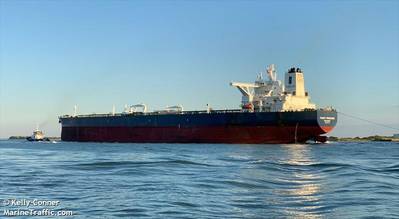 Oil tanker group Frontline reported a big jump in second-quarter earnings on Thursday as energy traders paid to store crude that went unsold amid the COVID-19 pandemic, the company said on Thursday.

Frontline's April-June adjusted net profit rose to $206.1 million from a year-ago $4.2 million, topping a forecast of $203.3 million in a Refinitiv SmartEstimate poll of analysts.

"Our results for the first half of 2020 are the strongest in more than 10 years," Chief Executive Robert Hvide Macleod said in a statement.

"The demand shock brought on by COVID-19 was so large and sudden that global commercial inventories quickly surged to record levels, effectively utilizing all available land-based capacity," Frontline said in its earnings report.

At the same time, the crude oil market went into contango, whereby prices for future delivery were significantly higher than for the near term, further encouraging traders to store oil on vessels.

"This in turn resulted in exceptionally strong tanker rates, which are reflected in our results for the second quarter of 2020," Frontline said.

The freight market for oil has since receded, however, as the global crude output declined, making the outlook for shipping rates less predictable, the company added.

While oil consumption plummeted in the first half of 2020 and global output was curtailed by the OPEC+ group and other countries, energy companies were still left with significantly more crude than they could sell.

"While tanker rates have seemingly found support at a lower level in the third quarter, we expect oil demand and demand for transportation to recover gradually," Macleod added.