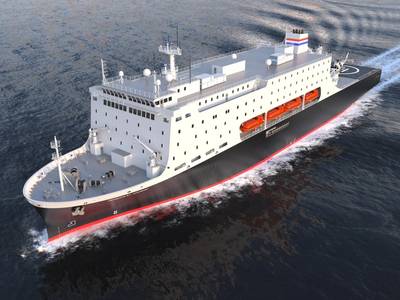 The newly funded ship, which has yet to be named, is the fifth in a series of 524.5-foot-long National Security Multi-Mission Vessels (NSMV) designed specifically for America's state maritime academies. It will replace Cal Maritime's aging training ship Golden Bear and is expected to be delivered within the next three to five years.

“We are grateful for the funding of this new ship,” said Cal Maritime president Tom Cropper. “This moment is remarkable – it culminates eight years of work by the Consortium of State Maritime Academies and for the first time, provides brand new training vessels for our cadets.”

The new highly capable, modern and versatile NSMVs will be a major upgrade from the retired and retrofitted naval vessels currently used to train state maritime academy cadets. “The training ship Golden Bear is a former oceanographic research vessel within the Navy fleet and has been retrofitted for cadet training. The ship requires continuous repairs, remodeling, upgrading, and improvements to best serve those aboard,” Cropper said.

According to Cropper, a key advantage of the NSMV is that it is purpose built with brand new and current technology, similar to what is found on modern merchant fleets. He noted the ships will feature diesel electric engines and diesel generators.

“The new NSMV will feature numerous instructional spaces, a full training bridge and accommodations for up to 600 cadets to train in a first-rate maritime academic environment at sea,” Cropper said. “In addition to providing additional billet space to educate our cadets the NSMV will provide them the opportunity to train on a state-of-the-art vessel.”

As an added benefit, the ships are also designed to support humanitarian assistance and disaster relief missions globally when needed. “The NSMV will have a helicopter deck and will have space to provide as a hotel service ship for first responders and medical trailers for humanitarian purposes. Upgrades for the ship also include thrusters, which reduces the need for a tug as well as roll on/roll off capability. The versatility of this ship is boundless,” Cropper said.

The new series of vessels is ultimately the result efforts made by U.S. Maritime Administration (MARAD) administrators, state maritime academy presidents and legislators—all recognizing the critical need for excellence in maritime education, and specifically the need for updated training ships.

“The bipartisan support of the new vessel underscores the support of Cal Maritime and the other state maritime academies,” Cropper said. “I send a special thank you to the delegates in the House of Representative and Senate from Alaska, California, Hawaii, Oregon and Washington in backing the new training ship and sharing in the value and mission of our academy.”

The current training ships and the new NSMVs are owned by the federal government and part of MARAD’s National Defense Reserve Fleet, on custodial loan to the state maritime academies.

“On behalf of the Maritime Administration, Transportation Secretary Pete Buttigieg and the Biden-Harris Administration, we are extremely pleased to receive funding for the fifth National Security Multi-Mission Vessel,” said Acting MARAD Administrator Lucinda Lessley. “This investment represents a steadfast commitment to our maritime workforce development and our national security. The construction and delivery of these vessels also demonstrates a highly innovative and cost-effective shipbuilding program that has enabled government to draw on industry best practices.”

In May 2019, MARAD selected TOTE Services to be the vessel construction manager (VCM) for the NSMV program, and in April 2020, TOTE Services awarded Philly Shipyard a contract to construct up to five NSMVs.