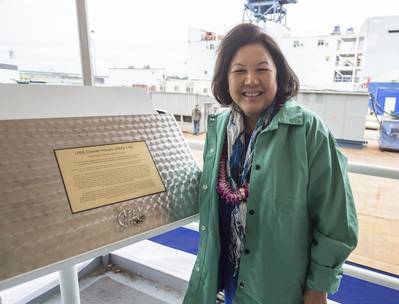 The $642.5 million Arleigh Burke-class destroyer DDG 118 has been under construction since October 2014 and is now over half completed. The 3,000-ton keel unit was moved onto the building ways from the Maine shipyard’s Ultra Hall earlier this year, signifying the start of hull integration and the precursor to integration, test and trials.
The U.S. Navy named the ship in honor of Sen. Daniel Inouye, a Medal of Honor recipient for heroism during World War II. Sen. Inouye represented Hawaii in the U.S. Senate for 50 years and was posthumously awarded the Presidential Medal of Freedom.
Irene Hirano Inouye, wife of the late senator, is the ship’s sponsor. A special steel plate containing her initials was prepared for the ceremony. Assisted by Frank Wood, a 31-year Bath Iron Works welder, the sponsor authenticated the laying of the keel by striking welding arcs onto the steel plate.
The DDG 118 keel laying ceremony was hosted by Ed Kenyon, DDG 51 Program Manager for Bath Iron Works, who welcomed the audience of Bath Iron Works employees, Navy personnel and representatives of other major subcontractors in the program, as well as the ship’s sponsor.
“This unit is a massive example of what we can accomplish here at Bath Iron Works, with people working together in a great enterprise,” Kenyon said. “Over the coming months, we will continue to apply the knowledge and expertise honed over the decades. Daniel Inouye will be a true and steady vessel, the pride of our Navy.”
Mrs. Inouye said her late husband worked hard as a senator to ensure our military had the most formidable equipment. She said the ship named for her husband would be a fitting tribute: “It will really leave a legacy for the senator and for the many things he stood for, most notably the fact that this country believes in democracy and all that we need to do to protect it.”
The future USS Daniel Inouye will be 509 feet long, have a beam length of 59 feet and be capable of operating at speeds in excess of 30 knots. It will be equipped with the Navy's Aegis Combat System.