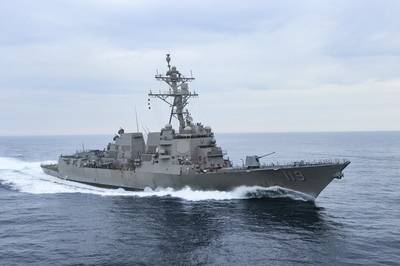 During acceptance trials, the ship's crew performed a series of demonstrations for review by the U.S. Navy's Board of Inspection and Survey (INSURV). These demonstrations are used to validate the quality of construction and compliance with Navy specifications and requirements prior to delivery of the ship to the U.S. Navy.

The ship was previously underway for Alpha trials in December, and again in February for builder's trials.

"The ship performed exceptionally well and demonstrated that the ship is materially ready to execute her mission," said Capt. Seth Miller, DDG 51 class program manager, Program Executive Office (PEO) Ships. "The success of these trials validates this highly capable ship will be a force multiplier when she joins the fleet."

The future USS Delbert D. Black, expected to be delivered to the Navy later this year, was was originally scheduled to be commissioned in 2019, but an allision at the shipyard in March 2019 caused scheduling delays, minor injuries and more than $30 million in damage to the new destroyer, which was still under construction at the time. A heavy lift ship delivering a floating dry dock to Ingalls Shipbuilding made contact with a test barge that was berthed alongside the destroyer and supporting electrical work aboard the destroyer, which then made contact with the destroyer.

Launched in 2017, DDG 119 is being constructed with the Aegis Baseline 9 combat system, which incorporates Integrated Air and Missile Defense capabilities, such as increased computing power and radar upgrades, that improve detection and reaction against modern air warfare and Ballistic Missile Defense threats. When operational, DDG 119 and her sister ships will serve as integral assets in global maritime security.

DDG 119 honors Delbert D. Black, the first Master Chief Petty Officer of the Navy, and will be the first naval ship to bear his name. Black is best known for guiding the Navy through the Vietnam conflict and ensuring proper enlisted leadership Navywide by initiating the Master Chief program.