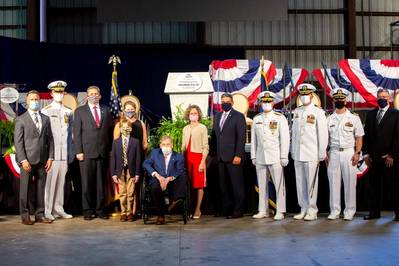 Austal Limited Chief Executive David Singleton said the continued success of the Independence-class LCS shipbuilding program demonstrated the extensive capabilities of the high-caliber Austal USA team. “The christening of a ship is an important milestone and an appropriate time to reflect on all of the hard work that goes into the construction of each and every vessel,” he said.

The Independence-class LCS is a fast, agile, focused-mission platform designed for operation in near-shore environments, yet it is also capable of open-ocean operation. It is designed to defeat asymmetric “anti-access” threats, such as mines, quiet diesel submarines and fast surface craft. The 127-meter high-speed trimaran hull warship integrates new technology and capability to support current and future mission capability from deep water to the littorals.

In addition to being in full-rate production for the LCS program, Austal USA is also the Navy’s prime contractor for the Expeditionary Fast Transport (EPF) program. Austal has delivered 12 EPFs, with a total of 14 under contract. Austal USA is also leading the evolution of connector and auxiliary ships, as Austal EPF designs for dedicated medical, maintenance, logistics, and command and control ships continue to impress fleet commanders.