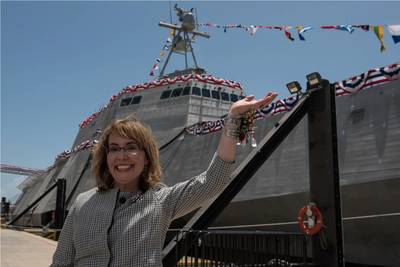 Austal delivered the fifth Independence-variant littoral combat ship (LCS), the future USS Gabrielle Giffords (LCS 10), to the U.S. Navy on December 23, exactly six months from the date LCS 8 was handed over, at an official document signing ceremony held aboard the ship.

This milestone marks the third LCS built by Austal as the prime contractor. “It’s exciting to be handing over another littoral combat ship to the Navy,” said Austal USA President Craig Perciavalle. “This is the fourth Navy ship we’ve delivered this year, a sure sign of the steady maturation and momentum of both our Expeditionary Fast Transport and Littoral Combat Ship programs.”

Six Independence-variant LCS remain under construction at Austal’s Alabama shipyard. Omaha (LCS 12) and Manchester (LCS 14) are preparing for sea trials.  Assembly is underway on Tulsa (LCS 16) and Charleston (LCS 18) and modules for Cincinnati (LCS 20) and Kansas City (LCS 22) are under construction in Austal’s module manufacturing facility.

“The success of this milestone achievement is a result of the hard work and dedication of Austal’s world-class shipbuilding team,” said Perciavalle. “The men and women of Austal are some of the most talented I’ve ever worked with and I’m looking forward to sharing many future successes with them and the thousands of suppliers across America supporting this program.”

More than 900 suppliers in 41 states contribute to the Independence-variant Littoral Combat Ship program. This supplier base supports tens of thousands of small business to large business jobs.

Austal is also under contract to build 12 Expeditionary Fast Transport vessels (EPF) for the U.S. Navy. Seven EPFs have been delivered while an additional three are in various stages of construction.