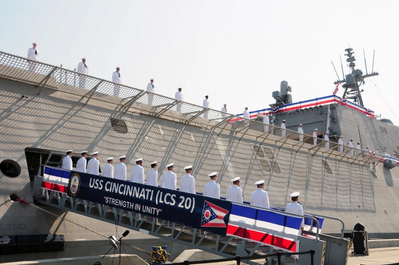 Shown is the USS CINCINNATI at its commissioning on October 5, 2019 in Gulfport, Mississippi. U.S. Navy photo by Chief Mass Communication Specialist Rosalie Chang

Shepherd was amongst a half dozen GE employees from the Cincinnati area that attended the commissioning ceremony on behalf of the company. Included was Steve Maynard, Director, Customer Application Engineering with GE Marine. Maynard is a retired U.S. Navy Captain as well as an active board member and the immediate past president of the Greater Cincinnati chapter of the Navy League of the United States.

Each of the two GE LM2500 engines produce over 29,500 horsepower, propelling the USS CINCINNATI to speeds in excess of 40 knots or 46 miles per hour. The LCS Independence-class fleet (even number ships) are built by Austal USA at its Mobile, Alabama, shipyard. To date, GE has contracts to provide LM2500 gas turbines for ships up to LCS 38.

LCS 20 is the fifth ship in naval history to be named Cincinnati with the first an integral part of the Civil War; the second served during the Cuban Revolution and the Spanish-American War; the third acting in World War II; and the fourth, commissioned in 1978 and serving during the Cold War.