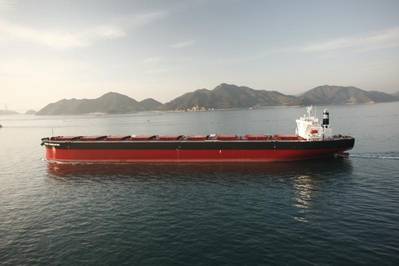 Bulk carrier owner Genco Shipping & Trading said it has completed a refit program that saw scrubbers installed on board its 17 Capesize vessels as part of the New York-listed owner's plan to comply with new International Maritime Organization (IMO) regulations that limit sulfur emissions from vessels to 0.5% down from 3.5%.

“The completion of this initiative has enabled us to comply with IMO 2020 regulations in a manner that meaningfully reduces sulfur emissions and strengthens our future prospects. Specifically, given the timely nature of our scrubber retrofits on our Capesize vessels, we have been able to capture the differentials between compliant and high sulfur fuel so far in the early stages of compliance, significantly de-risking the initial investment,” Wobensmith said.

In addition to the scrubber installs on its Capesize fleet, the balance of Genco's vessels, including one Panamax, six Ultramax, 20 Supramax and 11 Handysize bulkers, is running on ultra-low sulfur compliant fuel.

Fleet utilization plans
With no Capesize vessels scheduled to enter drydock for the balance of 2020, Wobensmith said Genco is working to maximize fleet-wide utilization for these vessels while reimplementing it active chartering approach.

“We strategically repositioned select Capesize vessels after the completion of their scrubber installations towards the Atlantic Basin during the end of 2019 to better capture market fundamentals,” he said.

“With a sizeable fleet and strong balance sheet, including an estimated $162 million of cash as of December 31, 2019, Genco remains poised to capitalize on favorable long-term drybulk supply and demand fundamentals, while creating near-term shareholder value through our regular quarterly cash dividend policy of $0.175 per share.”